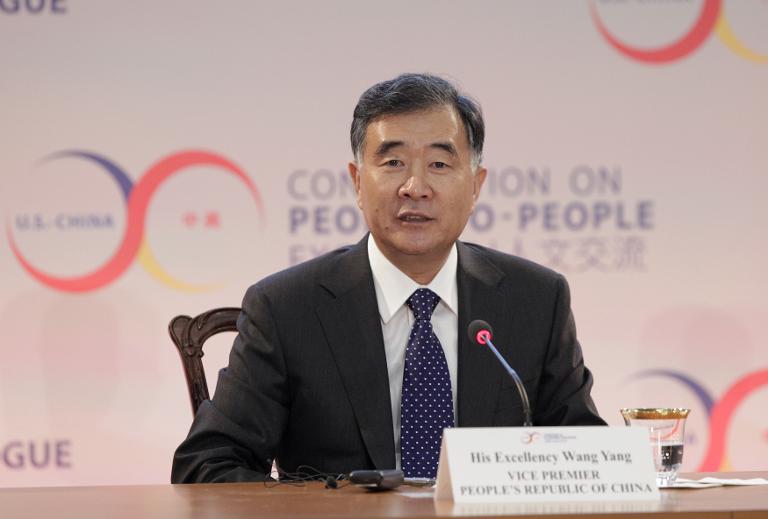 The United States and China candidly laid bare their differences Tuesday including on ensuring freedom of the seas and cyber hacking, but insisted they will work together to avoid confrontation.

At the start of key annual talks, US Vice President Joe Biden sharply warned Beijing that the world’s waterways — which carry 80 percent of the planet’s commerce — must remain open for trade.

The two major trading partners remain at odds over China’s claims to much of the South China Sea and Washington has repeatedly urged Beijing to stop building artificial islands and to resolve its numerous territorial claims peacefully.

But China said last month it will project its military power farther beyond its borders at sea and more assertively in the air.

“Nations that discard diplomacy and use coercion and intimidation to settle disputes, or turn a blind eye to aggression of others, only invite instability,” Biden warned.

In unusually frank comments, Chinese Vice Premier Wang Yang agreed Beijing and Washington do not agree on everything, admitting “on some issues, perhaps, consensus still eludes us.”

But he insisted “neither of us could afford the cost of noncooperation or even all-out confrontation.”

“Decision-makers of both countries must always remember that confrontation is a negative sum game in which both sides will pay heavy prices and the world will suffer too,” Wang said.

Welcoming the top delegation of some 400 officials also led by China’s State Councilor Yang Jiechi for the seventh round of annual talks, Biden insisted Beijing must be at the table in all important global negotiations to help set up a new “rules-based system” in a rapidly changing world.

“There will be intense competition, we will have intense disagreements. That’s the nature of international relations,” Biden said.

“There are important issues where we don’t see eye-to-eye, but it doesn’t mean we should stop working hand-in-hand,” he said.

US Secretary of State John Kerry insisted: “No nations agree on every issue. But we do not accept that a narrowing of the differences is beyond our reach.”

“We’re not satisfied with simply maintaining the status quo. Our relationship is dynamic and it has grown and matured steadily in the past decades.”

President Barack Obama will meet on Wednesday with members of the Chinese delegation, as the talks lay the groundwork for the upcoming visit of Chinese President Xi Jinping in September.

Yang Jiechi vowed China would work with the United States “in a spirit of openness, to properly address the relevant issues.”

High on the agenda is cyber hacking, with Treasury Secretary Jacob Lew insisting both nations must “abide by certain standards of behavior within cyberspace.”

“We remain deeply concerned about Chinese government-sponsored cyber-enabled theft of confidential business information and proprietary technology from US companies,” Lew told the delegations.

“Such activity falls outside of the bounds of acceptable state behavior in cyberspace. A more open, secure, interoperable and reliable cyberspace is critical to free and fair commerce.”

Ties have strained over US accusations of cyber espionage and a bilateral cyber working group was suspended by Beijing last year after Washington indicted five Chinese military officers for hacking into US computers.

This week’s talks come after revelations of huge breaches of US government computer networks at the Office of Personnel Management — an issue US officials said they would raise directly with their Chinese guests.

Kerry said the two countries, the world’s two largest economies but also biggest emitters of greenhouse gases, were working “effectively” to try to reduce emissions ahead of a key UN-led Paris conference on setting new targets in December.

“The idea is that you are creating a critical mass of countries that are setting these targets and everyone feels compelled to join,” Kerry said.

“We have a lot of hard work to do, but we have to keep at it day after day. This relationship is just too important,” Biden said. “Not only do we depend on it, but the world depends on our mutual success.”