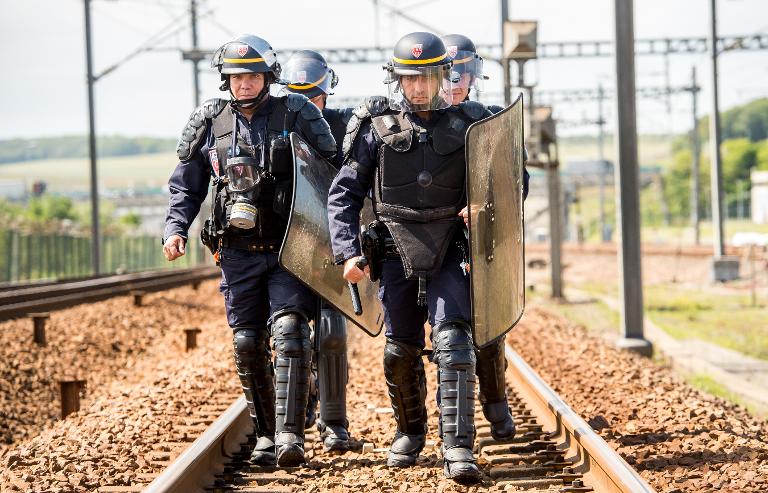 Hundreds of protesting French sailors on Tuesday forced the suspension of Eurotunnel services between France and Britain in both directions after torching tyres on the tracks, causing traffic and travel chaos.

The demonstrations also sparked a scramble among some of the thousands of illegal migrants camped in Calais hoping to reach Britain, as they battled to hitch a ride on vehicles stuck in traffic.

Some 200 MyFerryLink workers forced their way onto the tracks and were later cleared out by French riot police using tear gas canisters.

“We have been notified that protesters have gained access to rail tracks which means that for safety reasons Eurotunnel have to temporarily suspend their service,” the firm said earlier.

A Eurotunnel spokeswoman told AFP that protesters had got onto the tracks and had burnt tyres.

The demonstrators had earlier managed to occupy the docks in Calais port, preventing passengers from disembarking and forcing ferries to be diverted to the nearby port of Dunkirk.

Two MyFerryLink boats and a P&O ferry were stuck in the port.

The tunnel is used for drivers travelling between Britain and France, whose cars are transported on special trains, as well as for Eurostar passenger train services.

But Eurostar links are suspended until Wednesday, as a section of the rail is still under repair, a spokesman for the service said.

Early Tuesday morning, police broke up a sit-in on the A16 motorway leading up to the Channel Tunnel, with two protesters hospitalised after the operation.

Authorities deployed tear gas to disperse the demonstrators, who burst into a rendition of the French national anthem, the Marseillaise, as they were moved on.

Some of the thousands of illegal immigrants camped in Calais and desperately trying to cross the Channel to reach Britain took advantage of the chaos to climb onto immobilised vehicles, said an AFP reporter on the scene.

According to a source in the port, around 50 people prevented passengers from disembarking from a DFDS ferry from Britain in the early hours of Tuesday morning and the boat was forced to return to Dover in southern England.

Later ferries were being diverted to the port of Dunkirk.

Alarmed by the unrest, the French government issued a statement late Tuesday calling on Eurotunnel to “reexamine its plan” and to “work towards a better solution with regards to employment”.

The sailors, from the French ferry company MyFerryLink, were protesting plans by Eurotunnel to sell two of their ferries to rival Danish firm DFDS.

Eurotunnel announced in May it was halting its operational partnership with MyFerryLink due to legal complications, and this month decided to sell its ferries to DFDS.

“It’s out of the question that DFDS takes our boats. Never, never,” exclaimed the head of the main union on strike, Eric Vercoutre, who took up position with around 100 colleagues at the entrance to the tunnel in the early hours of Tuesday morning.

“We’ve been betrayed,” he said.

Unions say they fear as many as 120 jobs could be at risk from the potential sale.

Local MP Yann Capet said he was “furious” at the company’s actions.

Another protester said: “We just don’t understand. The boats work very well… We’re ready to get going again but I don’t know when.”