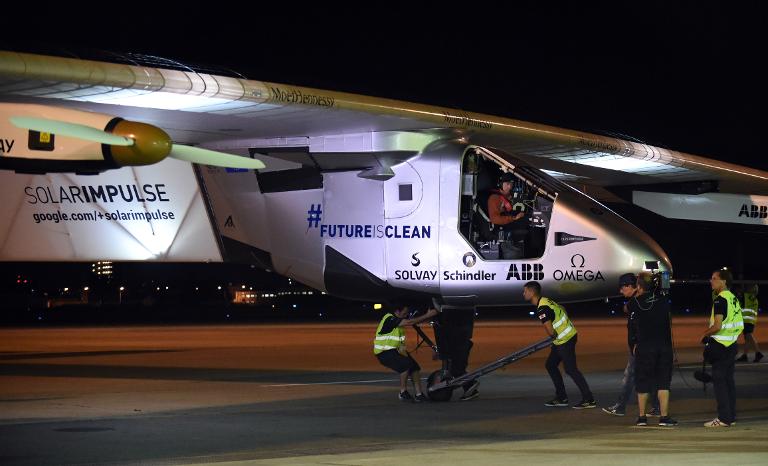 Mission controllers trying to fly a solar plane around the world cancelled take off from Japan early Wednesday because of weather problems over the Pacific Ocean.

Solar Impulse 2 had been due to leave Nagoya, central Japan, at 2.30 am (1730 GMT) bound for Hawaii, on the latest and most ambitious leg of a bid to circumnavigate the globe using only the power of the sun.

But after a few agonising hours poring over meterological charts and forecasts covering the next five days and five nights during which the flight was scheduled, mission chiefs pulled the plug.

“The flight was cancelled because of the weather around Hawaii. It’s a cold front. The priority is the plane’s safety and the pilot’s safety,” project spokeswoman Elke Neumann told reporters in Nagoya.

Speaking on a webcast moments after climbing out of the plane’s cockpit, pilot Andre Borschberg admitted he was “terribly disappointed”, but conceded it was the right thing to do.

“We were looking to find a way to make it, but I think it is reasonable not to exceed certain limits,” he said.

“The weather is so unstable over the Pacific.”

The featherweight flying machine was not supposed to land in Japan on its multi-leg trip around the globe, but bad weather en route from Nanjing in China to Hawaii forced a diversion at the start of June.

A chance to do so appeared to have presented itself on Tuesday.

“We finally feel like we have a window to Hawaii in front of us. It will be confirmed at 12.00PM UTC! (GMT)” tweeted Borschberg earlier in the day.

Take off was scheduled for the pre-dawn hours because wind tends to be calmer before sunrise, Neumann told AFP.

Borschberg, a 62-year-old Swiss, set a world record for endurance flight in a solar-powered airplane on the trip from China to Japan, logging 44 hours.

The journey to Hawaii was expected to last at least 115 hours, and with nowhere to land after leaving Japan, was considered the most risky so far.

However, Borschberg and his fellow mission chief Bertrand Piccard said they would not let Wednesday’s setback deter them, and vowed to try again.

“Solarteam is now looking for new windows to fly to Hawaii,” @solarimpulse tweeted.

Its wingspan is longer than that of a jumbo jet, but it weighs only 2.3 tons — about the same as a car.