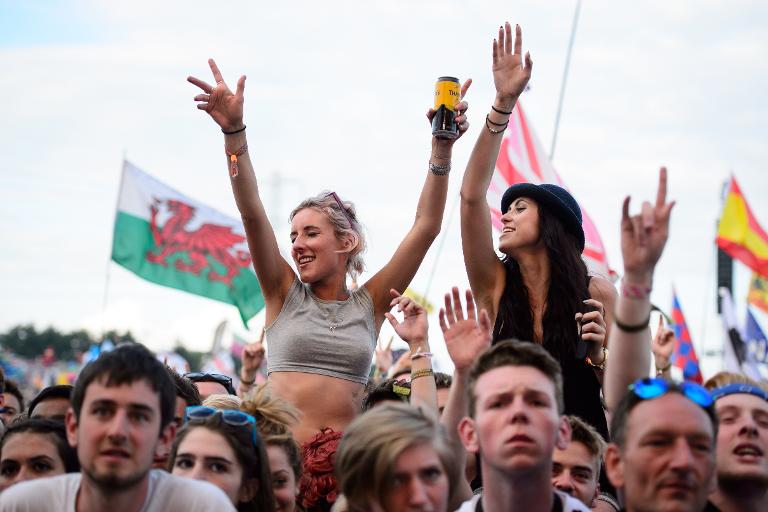 Music festivals such as Glastonbury leave the British countryside strewn with discarded tents and beer cans — but they’re big money-spinners for the nation’s economy, generating billions from revellers following the world’s biggest bands.

Fans from Britain and abroad are drawn by long-running events such as the Isle of Wight Festival and Glastonbury, which kicks off Wednesday — plus newer boutique gatherings with smaller crowds and bands, like Wales’s Green Man.

“Bands playing in muddy fields and concert halls around the UK have not only been adding to happiness and wellbeing, but have been driving wealth into recovering local economies across the whole of the UK,” said the study.

Culture minister John Whittingdale called the findings “fantastic” but said he was not surprised as festivals such as Glastonbury “hold an iconic status on the world music scene”.

Jo Dipple, UK Music’s chief executive, said: “The UK’s rich music heritage and infrastructure has made the UK the go-to destination for live music globally and these statistics show how tourism is now a bedrock of British music and the wider economy.”

In southwest England, where Glastonbury has been held since 1970 at Worthy Farm in Somerset, music tourism generated Â£297 million last year, including Â£221 million from festivals. Glastonbury is thought to account for around a third of this.

– Future of the music industry? –

While it generates significant revenues, Glastonbury is also one of the most expensive festivals in the world to attend, according to No1 Currency, a foreign exchange currency service.

Admission is Â£225 but the average total spend is Â£565, making it the second most expensive in the world behind Roskilde in Denmark.

Music festivals are not just big business in Europe. The United States is also home to a growing festival scene, with California’s Coachella, among the biggest, drawing 175,000 fans in April. The festival had a turnover of $78 million in 2014.

At a global level, San Francisco-based online marketplace Eventbrite handled ticket sales for 50,000 music and other festivals around the world last year, a 50 percent increase in 12 months.

With many musicians struggling to make as much money as they used to due to the digital transformation of the industry and the advent of streaming, some suggest festivals could be an economic lifeline for them, as well as benefiting host countries.

“I think music festivals are basically the future of the industry. It’s the only area where you are really seeing a lot of growth,” said Parag Bhandari, the head of UG Strategies, which recently launched the Uphoric digital television network dedicated to covering the global festival circuit.

“It’s really the last area in the music industry where there is real money to be made for artists.”