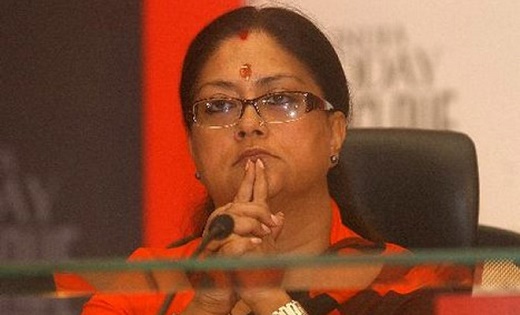 New Delhi: Pressure mounted on Wednesday for the ouster of Rajasthan Chief Minister Vasundhara Raje after emergence of a document purportedly carrying her signature to back Lalit Modi’s immigration application in the UK, with Congress saying she stood “exposed completely” while batting for a “fugitive”.

Stepping up the offensive against Raje, who had claimed she did not recall having signed such a document, Congress accused her of “repeatedly lying” and demanded her immediate resignation.

“The curtains are off, the secret is out. The document signed by Vasundhara Raje dated August 18, 2011 supporting his immigration case before the British government is out. When the issue came out first, she feigned ignorance and then said she does not remember,” senior party leader Jairam Ramesh told reporters at the AICC briefing.

Raje was alleged to have agreed to become a witness to the former IPL Czar’s immigration application provided it was kept a secret in India.

“BJP has always maintained that if papers are produced with her signature, then she is culpable. There is no need of anymore evidence, Vasundhara Raje stands thoroughly exposed,” Ramesh said.

Ramesh said the Congress seeks her immediate resignation as she has broken four laws – Indian Penal Code, Prevention of Corruption Act, PMLA, Passport Act, while batting for a “bhagora” (fugitive).

Displaying the seven-page document having 21 points, he said, “This has never happened in independent India before where a former Chief Minister and Leader of Opposition has batted for a fugitive”.

There was no official confirmation from BJP about reports that it has sought an explanation from Raje and despatched a two-member team headed by Union Health Minister JP Nadda to Rajasthan.