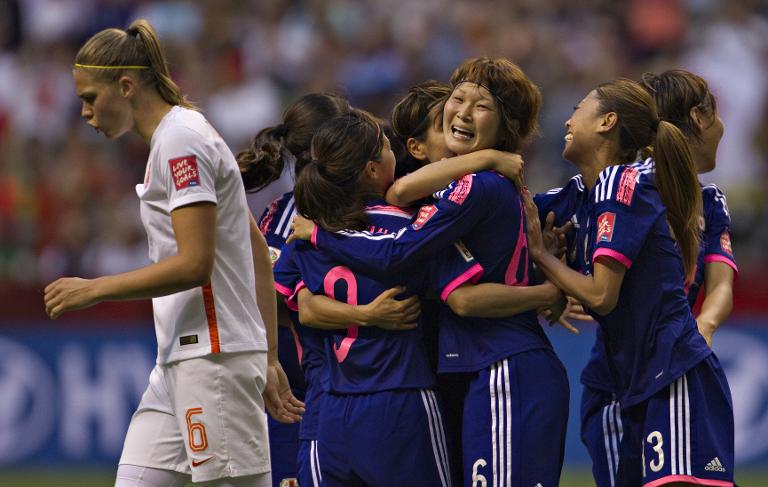 Japan gave newcomers the Netherlands a lesson in football on Tuesday, winning 2-1 to advance to a last-eight showdown with Australia at the Women’s World Cup.

Saori Ariyoshi and Mizuho Sakaguchi scored in either half for the defending champions who are the only team left in Canada to have won all their matches.

Kirsten Van de Ven headed in a consolation goal for the 12th-ranked Dutch in injury time, helped by an error from Japanese goalkeeper Ayumi Kaihori, who let the ball slip from her grasp.

But the game in Vancouver’s BC Place Stadium was mostly one-way traffic in favour of the Japanese, who have mastered the speed provided by artificial turf being used for the first time at a World Cup.

“It’s the best way to improve, a good team will learn a lot from this match,” said Dutch coach Roger Reijners.

“You’re playing against the top in the world and things are moving really fast.

“It’s an enormous difficulty, you have very little space with a team like Japan. When you did get the ball they quickly took it back.”

The in-form Japanese next head to Edmonton where they take on tenth-ranked Australia, who shocked Brazil to win 1-0 in the Commonwealth Stadium on Saturday.

“We’re used to playing Australia,” coach Norio Sasaki said ahead of what will be a rerun of the 2014 Asian Cup final which Japan won 1-0.

“But Australia now is a completely different team, they have improved a lot and are technically superior.

“Since I’ve taken over as coach we have never lost to Australia, but they have a great potential now and we need to be aware of that.”

The Japanese controlled their last-16 game from the outset with defender Ariyoshi scoring her first goal for the ‘Nadeshiko’ on 10 minutes.

Aya Sameshima and Shinobu Ohno both missed chances to add to the champions’ tally in the first half.

After the break, Mandy Van den Berg almost inadvertently turned the ball into her own net following Nahomi Kawasumi’s cross.

Sakaguchi had a shot blocked on 67 minutes and defender Sameshima was saved by a superb block by Kaihori from a close-range effort from Van De Ven on 76 minutes.

But two minutes later Sakaguchi got Japan’s second from the edge of the penalty area.

A late scramble for the equaliser by the Dutch after Van De Ven got one back saw a Vivianne Miedema effort just miss the target.

“We probably could have had better control of the ball, but we had a tense moment,” said Sasaki.

“We ended every attack with a shot on goal. That was the key. We had a very solid defence. I’m sorry we kept you in suspense until the end.”

Sasaki admitted his side’s game had been helped by the heavily watered artificial turf at BC Place Stadium.

“We actually ran the most today on this pitch. There was a lot of water and we could run very well.

“I’m going to ask maintenance to keep it watered so the game can move fast. It’s better for both teams.”

The Netherlands needed a win to book their ticket to the 2016 Olympics along with Germany and France but now face a play-off for the third remaining European berth.

“Our aim was to qualify for the Olympic Games but we didn’t manage it, so naturally weâ€™re disappointed about that too,” added the Dutch coach.

In other last-eight fixtures, top-ranked Germany play third-ranked France in Montreal on Friday while China take on Olympic champions United States in Ottawa and hosts Canada clash with England in Vancouver on Saturday.