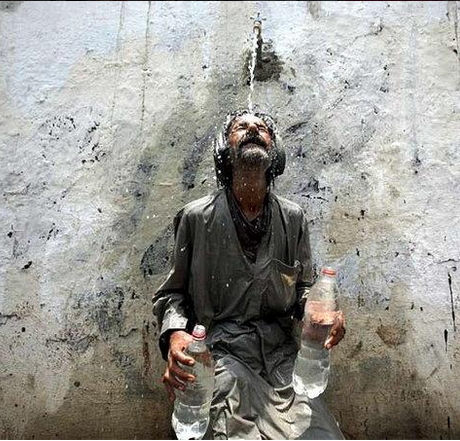 The killer heatwave in Pakistan is in no mood to fizzle out.

The government has declared a state of emergency in Karachi, Pakistan’s largest southern city, after a heatwave killed more than 700 people there and left thousands fighting for their lives at hospitals.

The declaration came on Tuesday and all the educational institutions and its offices were asked to shut down for some time.

The heatwave, sweeping across Sindh province, has been going on since the start of Ramzan on Friday, wreaking havoc and triggering an emergency situation in major hospitals of the province.

The toll in worst-hit Karachi has topped 692 with around 10 more dead in other parts of southern Sindh as a result of soaring temperatures, a senior health official was quoted as saying by media reports.

Doctors at the Abbasi Shaheed Hospital said 71 people had died due to the heatwave until Monday. Saeed Qureshi, a doctor at the Civil hospital, confirmed 70 deaths.

Temperatures of 44 to 45 degrees Celsius have been recorded in Karachi since Friday with the scorching heat continuing till Tuesday, although the met office has forecast a break in the heatwave by the evening.

“We had until yesterday evening nearly 200 deaths from this heatwave,” said Seemi Jamali, medical superintendent at Jinnah Hospital.

“These 200 include bodies we have got from the scorching heatwave and those who passed away in the hospital while under treatment for heatstroke and dehydration,” she said.

Jamali said the hospital had in four days treated around 3,000 people suffering from illnesses related to the heatwave.

Most of the deaths have occurred due to heat and gastro-related problems, said Salma Kausar, spokesperson Karachi Medical Corporation.

“We are closing offices, schools and colleges not just in Karachi but throughout Sindh,” Sindh Chief Minister Qaim Ali Shah said in the Sindh Assembly. But he said offices that offer essential services like hospitals will remain open.

The Sindh government has imposed a state of emergency at all hospitals, cancelling leave for doctors and other medical staff and is increasing stocks of medical supplies.

The Pakistan Army and paramilitary Rangers have also set up special centres for treatment of heat stroke victims and also supplied related medicines to government hospitals.

Sindh CM directed schools, colleges and government offices to close as an apparent means to alleviate the suffering of those afflicted by extreme weather.

Also read: How to beat heatwave