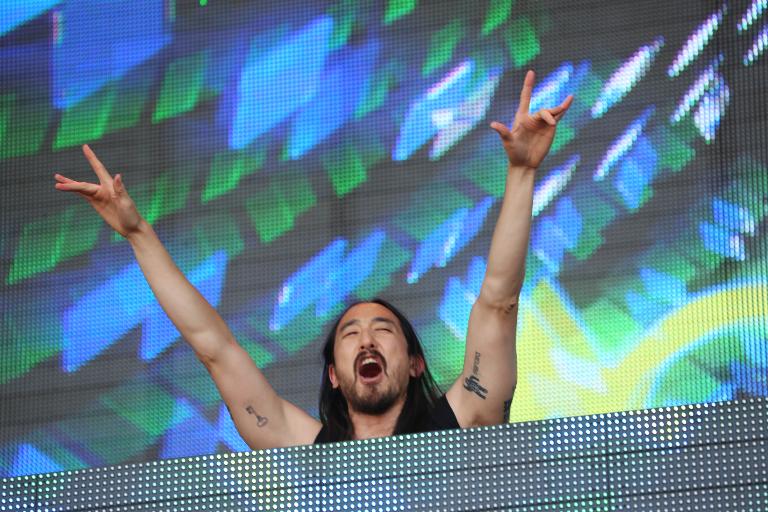 As thousands of young people swayed and sweat under the sun to his beats, Steve Aoki raised his arms in joy and, to show his love, covered a lucky few with cakes he tossed from stage.

The electro-house DJ has risen to become one of the top-grossing and most in-demand electronic artists. But for all of his boisterous stage persona, Aoki sees a spiritual dimension to his music — and believes he is staying true to the spirit of the underground scene that made him.

The album ends with a cameo from J.J. Abrams, director of the upcoming “Star Wars” sequel, who warns over a hazy electronic backdrop that “the neon future is entirely unpredictable” but “before you know it… will be the past.”

“Neon Future II” has somber overtones even on club-packing numbers such as “I Love It When You Cry” and “Darker Than Blood,” which Aoki wrote with hard rockers Linkin Park.

Aoki said he was inspired by a conversation with Ray Kurzweil, the Google-affiliated futurist who studies life extension.

While last year’s “Neon Future I” was a celebration of the possibility of eternal life, Aoki said his new album looked more harshly at “the evolution of where we’re going with our technology.”

“You can call it the spirituality of ‘Neon Future.’ It might be darker, but it is also more sincere,” Aoki told AFP.

“If you listen in its entirety, it’s raw, it’s more visceral, it’s more unadulterated,” he said of the album.

Aoki was one of the most well-received artists at last weekend’s Firefly Music Festival in Delaware, one of a string of dates on a packed tour schedule.

The 37-year-old, known for his flowing black hair, could be thought to have inherited some of his theatrical flair from his father, Hiroyuki “Rocky” Aoki.

A wrestler from Japan, Rocky Aoki amassed a fortune after moving to New York and establishing the Benihana restaurants, where table-side teppanyaki chefs dazzle patrons through acrobatics with knives.

Yet the future DJ millionaire had an estranged relationship with his father, known for his turbulent love life and personal thrift, and grew up in southern California.

Aoki said he was shaped by growing up as a rare Asian American in the predominantly white city of Newport Beach, south of Los Angeles in Orange County.

“It would be different if I were just a white kid growing up in a white middle/upper-class neighborhood and grew up with no qualms about everything,” he said.

“I would probably just have a nine-to-five job — and be happy, I’m sure — but this is where it’s led me,” he said.

He credits his father’s influence and Japanese heritage for one key trait: his work ethic.

“Japanese people are the hardest working people I’ve ever seen. They work to the bone,” Aoki said.

“I could probably say that I’m one of the hardest working DJs in the business. I don’t necessarily know if that’s a good thing either, but I know that I am.”

Aoki had his start in the music business while a student at the University of California, Santa Barbara, where he majored in women’s studies and sociology and threw concerts in his room.

His entrepreneurship turned into Dim Mak Records — named after the death strike in martial arts — that became famous for its Los Angeles parties, that attracted artists from Lady Gaga to Kanye West.

Originally a punk rocker, Aoki said it took him up to four years of experimentation before he felt comfortable putting out his own electronic music in 2008.

Aoki said that Dim Mak has survived nearly 20 years by staying true to its underground spirit.

“We are now the punk of electronic music,” he said.

“It’s going to be pirated anyway. Just make it easier and get it into the culture,” Aoki said.

While some artists fear EDM is becoming too mainstream, Aoki has no complaints.

“We’ve been fighting to get this on the main stage,” he said. “I’m proud of that.”