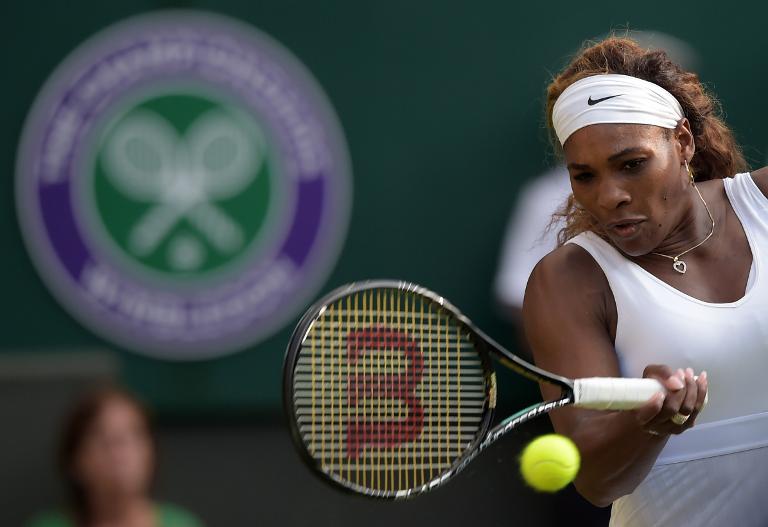 Serena Williams has set her sights on moving a step closer to an historic calendar Grand Slam as the world number one launches her bid for a sixth Wimbledon crown.

Williams returns to the All England Club next week for the first time since her distressing meltdown midway through a doubles match last year in which she was so badly affected by an apparent virus that she could barely hit the ball over the net.

Those bizarre images of a dazed Serena stumbling around Court One — coming just days after her lacklustre third round defeat in the singles at the hands of Alize Cornet — prompted some to suggest the American’s glittering career was heading for a painful final chapter.

But the 33-year-old’s response has been typically dramatic and decisive.

Serena won the US Open to end 2014 on a high and then swept to Australian and French Open triumphs this year, bringing her back to the All England Club within two major titles of achieving the first calendar Grand Slam since Steffi Graf claimed the four top titles in 1988.

“Obviously I would love to win a Grand Slam. I think it would be awesome,” said Serena, who defeated Lucie Safarova to clinch her third Roland Garros title earlier this month.

With 20 Grand Slam titles to her name, Williams sits third on the all-time list and is closing fast on Margaret Court’s record of 24, with the possibility of equalling second placed Graf’s tally of 22 by the end of the year.

But for now, Serena, who has only won three Grand Slams in a year once in 2002, is focused solely on making a good start to her Wimbledon campaign after failing to get to the quarter-finals for the last two years.

“I haven’t done great at Wimbledon the past two years, so I’m going to take it a day at a time there,” Williams said.

One of the main threats to Serena was expected to come from defending champion Petra Kvitova, who clinched her second Wimbledon title with a ruthless rout of Eugenie Bouchard in the final 12 months ago.

But the 25-year-old Czech is not yet certain she will be fit enough to defend her crown after she was forced to withdraw from this week’s Wimbledon warm-up event at Eastbourne due to a virus.

“It doesn’t really make sense to play and not be ready for Wimbledon. I may get more sick than I am now. So I hope I can just recover now,” the world number two said.

Five-time Grand Slam champion Maria Sharapova will be expected to emerge as a major contender for the title she won as teenager 11 years ago.

But the 28-year-old Russian, the world’s richest female athlete, has yet to prove she can master Serena, who routed Sharapova in this year’s Australian Open final to extend her dominant record to 17 wins in their 19 meetings.

Bouchard was widely tipped as the heir apparent to Sharapova as the sport’s glamour girl when the Canadian, whose mother named her after British royalty, captured the hearts of the Wimbledon fans during her run to the final last year.

However, that success was the prelude to a sophomore slump that has seen the 21-year-old lose in the first round of seven tournaments in 2015.

Bouchard hopes a return to the All England Club will improve her fortunes and she said: “When I go to Wimbledon I’ll have memories from last year popping into my head, which will hopefully give me confidence that I’ll play really well.”

Safarova and world number three Simona Halep, both Wimbledon semi-finalists last year, will also expect to go deep into a tournament, but few expect anything other than a Serena celebration on the final Saturday.