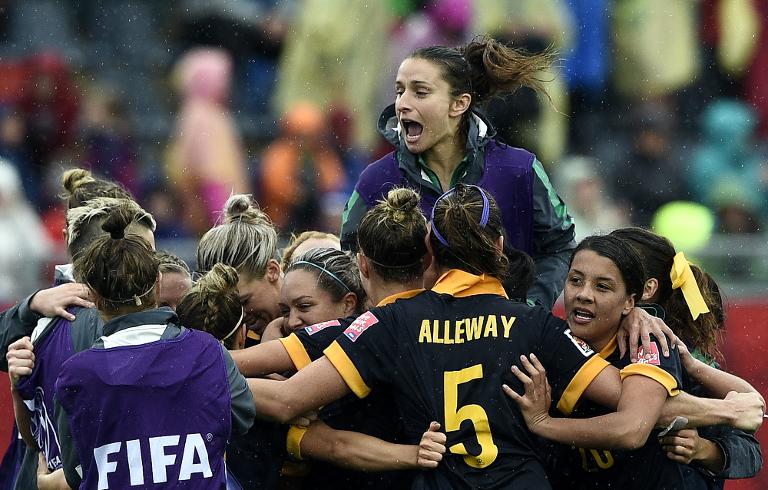 Australia’s women footballers should be offered more “attractive conditions” including higher match fees, their union said Wednesday after the team dumped star-studded Brazil out of the World Cup to reach the quarter-finals.

The women’s national team, the Matildas, will be paid just Aus$750 (US$581) each under their current contract when they take on reigning champions Japan on Saturday in Edmonton, Canada, for a place in the semi-finals.

In contrast, their male counterparts are paid Aus$8,500 each when they play in the quarter-finals of a comparable tournament, excluding bonuses, according to a separate agreement.

“What we are seeing at the moment with the Matildas is that many of them are having to combine their playing commitments with part-time jobs and they’re also trying to juggle that with studying,” a spokesman for the union, Professional Footballers Australia, told AFP.

“(But) the Matildas’ commitments are very much full-time. They’ve been in camp for 120 days over the past six months and they are away from their families so to be able to balance those commitments with any sort of meaningful employment is extremely difficult.”

The spokesman said the union — which is in negotiations with governing body Football Federation Australia (FFA) as the current Matildas agreement expires in July — was pushing for the players to “receive what is a fair and equitable share of revenue”, although that may not necessarily mean pay equality with the men.

He added that providing more “attractive terms and conditions” — including for match fees, travel arrangements and accommodation — was necessary to keep top athletes in the game and provide a viable career path.

The Matildas, who are on a minimum annual playing contract of Aus$21,000, were paid Aus$500 each for their Women’s World Cup group matches and will get Aus$1,500 if they make the final.

The Socceroos — the men’s national team who won the Asian Cup in Sydney earlier this year — have match payments of Aus$7,500 each for major tournament group games, with the fees rising to Aus$11,500 for a final. They are not given a base pay but receive far greater commercial payments and sponsor bonuses.

The FFA said it had invested heavily in the Matildas’ World Cup preparations and was pushing hard to secure more sponsorship.

“FFA is working hard to overcome the challenges in securing commercial partners for women’s football on top of the commitment from (shopping centre giant) Westfield who support both the W-League and Matildas,” a statement said.

“The results in Canada and the way the players have conducted themselves can only help in securing the commercial support that can drive significant growth in expenditure.”

China’s state media Monday said their women’s football team would receive the “highest ever” bonus of around one million yuan (US$160,000) as a reward for reaching the World Cup quarter-finals.