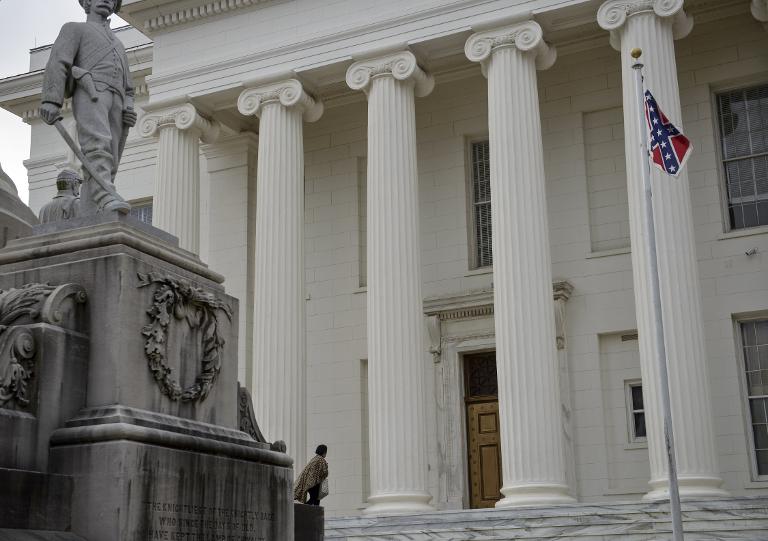 The Confederate battle flag was taken down Wednesday outside Alabama’s state legislature as Americans increasingly shun the Civil War era saltire after the Charleston church massacre.

Two workers were seen quietly and quickly lowering the flag that has long flown alongside a Confederate war memorial on the state Capitol grounds in Montgomery.

“We are facing some major issues in this state regarding the budget and other matters that we need to deal with,” the Republican governor told local media.

“This had the potential to become a major distraction as we go forward. I have taxes to raise, we have work to do and it was my decision that the flag needed to come down.”

Last Wednesday’s shooting deaths of nine African-Americans during bible study at the historic Emanuel African Methodist Episcopal Church in Charleston by a young while man has rekindled controversy over the flag.

Dylann Roof, 21, charged with murder, has been seen in photographs brandishing the flag, which some honor as a symbol of Southern heritage but others denounce as an emblem of white supremacy and hate.

Pressure is growing in South Carolina to take down the Confederate flag that has flies on the front lawn of its State House in Columbia, also alongside a Confederate war memorial.

Governor Nikki Haley, a Republican, said Monday “it’s time to move the flag,” a point of friction in the state for years — but doing so, by law, would require a decision of the state legislature.

Unlike other flags, the Confederate banner was not lowered to half-staff in the wake of the Charleston killings, whose victims included Emanuel’s chief pastor and state senator Clementa Pinckney.

Major US retailers have said they will no longer sell Confederate flags, and the NASCAR stock car racing organization — whose events are wildly popular in the South — said it favored its removal in South Carolina.

Elsewhere, a movement to strip the Confederate emblem from Mississippiâ€™s state flag picked up steam Wednesday, with more than 50,000 people signing a petition for change and a conservative US senator voicing support as well.

“After reflection and prayer, I now believe our state flag should be put in a museum and replaced by one that is more unifying to all Mississippians,” said Roger Wicker, one of Mississippiâ€™s two US senators.

As the descendant of Confederate soldiers, Wicker said in a statement that he personally did not consider the state flag to be offensive.

“However, it is clearer and clearer to me that many of my fellow citizens feel differently and that our state flag increasingly portrays a false impression of our state to others,” he said.

Funeral services for the nine Charleston victims are set to begin Thursday, with President Barack Obama to deliver the eulogy at Pinckney’s funeral on Friday.

On Wednesday, Pinckney’s body was lying in state inside the South Carolina State House rotunda — with the Confederate flag still flying outside.