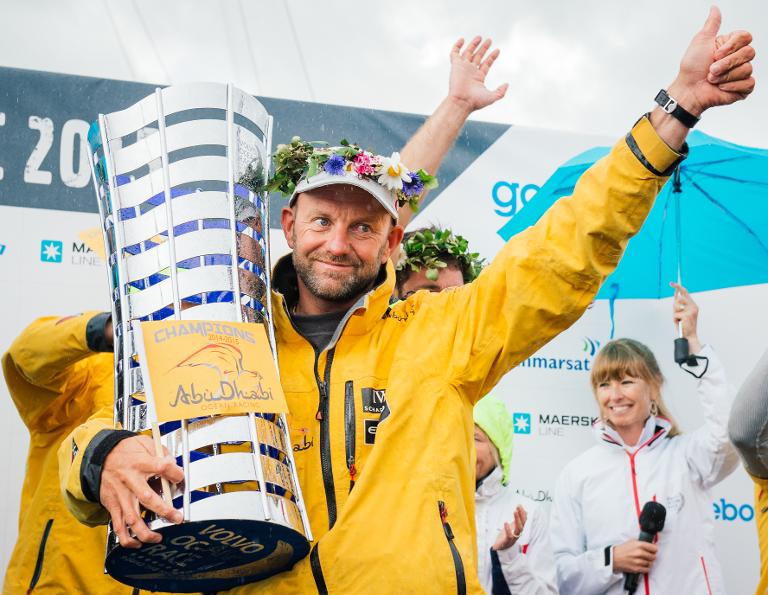 Ian Walker secured the first ‘British’ victory in the Volvo Ocean Race, which was launched 41 years ago from Portsmouth, and woke on Tuesday with the challenge of ‘what next?’.

The 45-year-old has devoted the last seven years of his life to climbing a personal Everest.

No British skipper had won offshore sailing’s toughest and most prestigious event, formerly the Whitbread Round the World Race, but Walker put that to rest on Monday in Gothenburg with a resounding, five-point win after nine, gruelling months at the helm of Abu Dhabi Ocean Racing.

The race has covered some 38,739 nautical miles since the seven-strong fleet set out from Alicante, Spain in October last year, visiting 11 ports and every continent.

Walker made his first attempt to win this ultimate test of guts and stamina as well as seamanship in the 2008-09 edition on a joint-funded Chinese/Irish boat called ‘Green Dragon’. Its design, however, had flaws, which gave Walker little chance of challenging Brazilian Torben Grael for the overall title.

Three years later, he was back for the 2011-12 race, but again an uncompetitive boat, backed by Abu Dhabi, let him down and he finished fifth.

A particular lowlight of that campaign was on the very first night at sea when Walker’s boat had its mast snapped in a savage Mediterranean storm and was forced to limp back into port in Alicante, Spain, for repairs.

Walker refused to give up on his dream and neither, to their credit, did his backers from Abu Dhabi. He arrived in Alicante pre-race for the 12th edition in October 2014, relaxed and confident, after the perfect build-up in a one-design Volvo Ocean 65, which he could be sure, was the equal of any of his rivals.

He also assembled an eight-strong crew of tried and tested professionals such as navigator, Simon Fisher (Britain), and Justin Slattery (Ireland).

“Our game plan is simple,” he told reporters on the eve of the opening skirmishes in Alicante nine months ago. “If we can be on the podium for every leg, we will not be far away from winning this thing.”

It was a strategy that worked to perfection.

His boat, Azzam, had accrued two victories â€“ achieved in the testing leg one from Alicante to Cape Town and then the epic leg five through the South Ocean â€“ by the time they had finished the sixth stage of nine.

Just as importantly, they were solidly on the podium in all the others, with three of them in runners-up spot.

But a broken mast forced the Chinese team out of leg five and with it they picked up eight points for a non-finish in a contest in which the lowest score wins.

Suddenly, the race was Walker’s to lose.

Walker and his vastly experienced crew never looked likely to drop their golden opportunity, despite fifth places in legs seven and nine.

“It’s an amazing feeling, so much hard work goes into it,” he recalled for the press conference on Monday.

“My whole relationship with the Whitbread started as a kid with pictures of the boats on the wall.

“I did my first Volvo Ocean Race two editions ago and I really wasn’t sure if I’d be up to it. I wondered what the Southern Ocean would be like, lots of self-doubt, and itâ€™s been a long, old road.

“We’ve made a lot of mistakes and we’ve learned a lot of lessons and this time round we threw all that experience in place, surrounded myself with good guys and it worked.”

His hope now is that the achievement will further popularise a sport that is continuing to gain traction in Abu Dhabi and elsewhere in the Gulf region.

“It’s a big deal. A big part of what weâ€™re trying to do is try to popularise the sport there and get young Emiratis sailing.

“The best way we could do that was to win the race.”

And for Walker next? “I’m going home for the summer â€“ my kids want their Daddy back.”