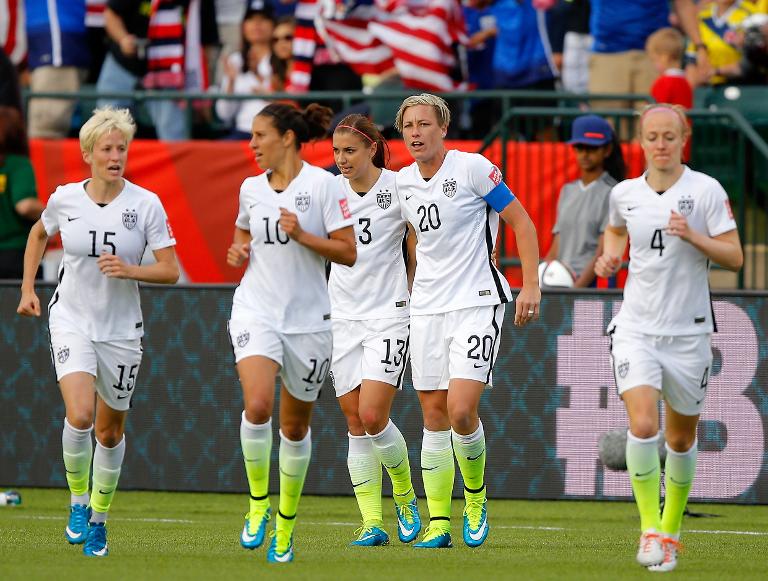 The United States moved into the Women’s World Cup quarter-finals with a 2-0 win over Colombia as England fought back to beat former winners Norway 2-1 to book their last eight spot.

Alex Morgan and Carli Lloyd on Monday both scored in the second half of a tough game for the second-ranked Americans at Edmonton against 28th-ranked opponents who played the second half a woman down.

Among the title favourites, the United States — winners in 1991 and 1999 — next play China in Ottawa on Friday while England meet hosts Canada in Vancouver on Saturday for a place in the semi-finals.

Sixth-ranked England were trailing after Solveig Gulbrandsen headed in for 1995 champions Norway after 54 minutes in Ottawa.

But second-half goals from captain Steph Houghton and defender Lucy Bronze gave England their first win in the knockout round of the tournament.

“The names of these players, this team, will go down in English football history — but make no mistake, this journey is not over,” warned coach Mark Sampson.

“Canada have the home crowd, excellent players, an excellent manager, we need to produce another massive England performace to get though.”

In Edmonton, goalkeeper Catalina Perez was giving her marching orders in her first World Cup game following a diving tackle on US forward Morgan two minutes after the break.

Abby Wambach stepped up to take the penalty but dramatically sent the ball left of goal, denying her a record-equalling 15th Women’s World Cup goal to match Brazil star Marta.

Morgan finally broke through after 53 minutes with Lloyd getting a second 13 minutes later from a penalty after Megan Rapinoe was fouled inside the box by defender Angela Clavijo.

It was, however, a costly game for the Olympic champions, with key midfielders Rapinoe and Lauren Holiday set to miss the China game after collecting yellow cards.

“We’ve dealt with injuries so I feel very confident in the players we have to be able to step up and help us advance,” said US coach Jill Ellis.

Perez, 20, was replacing first-choice goalkeeper Sandra Sepulveda, who was sitting out the game after a second yellow card. Perez pulled off three impressive saves in the first half.

At the other end of the pitch, Hope Solo was rarely tested as she earned a US goalkeeping record 174th cap.

European runners-up Norway, Olympic champions in 2000 and World Cup winners in 1995, now head home despite the 11th-ranked side holding top-ranked Germany to a 1-1 draw last week.

Bronze got the winner with 14 minutes to go with a powerful long range shot from 25 metres out.

“England scored on their first scoring chance to level the game and we started to struggle. We became stressed,” lamented Norway coach Even Pellerud.

“Compliments to my English colleague who managed to do some nice tactical changes at half time.”

In other quarter-final matches, Germany play France while Australia will meet either holders Japan or the Netherlands, who meet for their last 16 game in Vancouver on Tuesday.