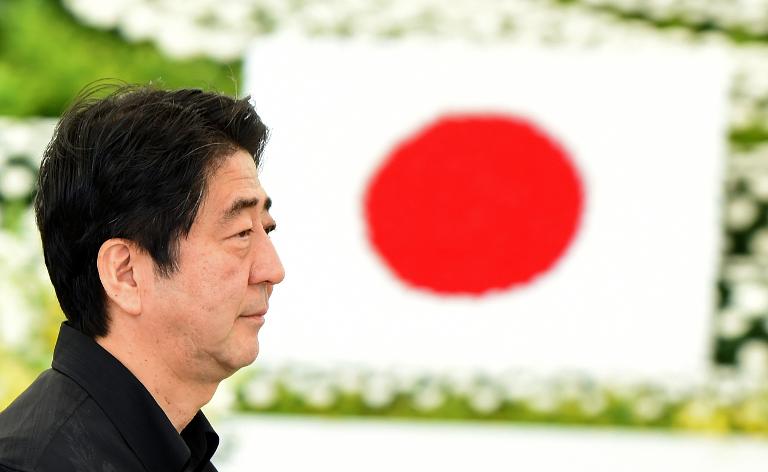 Japan’s premier Shinzo Abe was heckled Tuesday at a ceremony to mark the 70th anniversary of the end of the Battle of Okinawa, the bloodiest episode in the Pacific War, as anger flared over the US military’s continuing presence.

In a highly charged ceremony on Okinawa, Abe was shouted at by locals angry at the size of the United States’ presence on the subtropical islands.

Cries of “Go home!” could be heard as he took the podium. It is relatively unusual for a Japanese prime minister to be jeered by the public.

Abe, who appeared rattled, told the audience Japan had for decades enjoyed the dividend of peace after the horrors of World War II.

“People in Okinawa have long been asked to carry a big burden for our security,” he said. “We will continue to do our best to reduce (it).”

Governor Takeshi Onaga was warmly applauded by the 5,000-strong crowd after using his speech to denounce “the heavy burden” of American bases in Okinawa, host to more than half of the 47,000 US service personnel in Japan.

“Seventy-three-point-eight percent of US military facilities (in Japan) are still concentrated in our prefecture, which makes up only 0.6 percent of the country’s land area,” he said.The ceremony took place in Itoman, at the southern tip of Okinawa, near the spot where terrified islanders had jumped from cliffs or were pushed to their deaths in June 1945 on the orders of Imperial Army soldiers taught never to surrender.

Thousands of visitors, many of them survivors of the war, filed past black marble monuments inscribed with the names of the fallen, to pray and leave flowers.

More than 100,000 Okinawans and 80,000 Japanese troops died in the 82-day battle for the strategically placed island chain.

“It was innocent civilians who suffered,” survivor Takeko Kakazu, 97, told AFP. “Seventy years have passed but the cruelty of the war stays with me.”

“We fled south from Naha (the capital of Okinawa), but there were no caves left to hide in,” added Kakazu, who was pregnant at the time and gave birth on an American warship after being caught.

“The bombs kept dropping and we had to hide under trees. It was dreadful.”

Over 12,000 American soldiers also perished in what many had feared was a foretaste of the fight they would have to wage for the Japanese mainland.

That invasion never came, partly because of the atomic bombings of Hiroshima and Nagasaki, with a cowed Japan surrendering in August 1945. Entire families were wiped out and almost everyone on the island lost at least one relative.

As well as those who committed suicide by plunging off cliffs rather than surrender, Americans found thousands more locals dead in caves where they had been hiding to escape the furious US bombardment.

The war anniversary comes with feelings running high on Okinawa — a one-time independent kingdom annexed by Japan in the 19th century.

A controversial plan to move a US air base from a crowded urban area to the rural spot of Henoko on the coast is proving deeply unpopular, with many wanting it to be put somewhere else altogether.

“We strongly demand that the government cancel construction [at] Henoko and review its policies of reducing Okinawa’s base burden once again,” Governor Onaga said Tuesday.

However, Tokyo and Washington have both insisted that the plan to move it — conceived two decades ago — is the only viable option for shutting down Futenma Air Station.

Renewed local opposition to the proposal and a series of angry protests have coincided with a push by Abe’s nationalist government to give Japan’s well-resourced, but tightly restricted, military more leeway to act internationally.

Critics say the move runs counter to the country’s pacifist constitution, which was imposed by US occupiers in the aftermath of WWII, but has since been adopted as an article of faith by many Japanese.