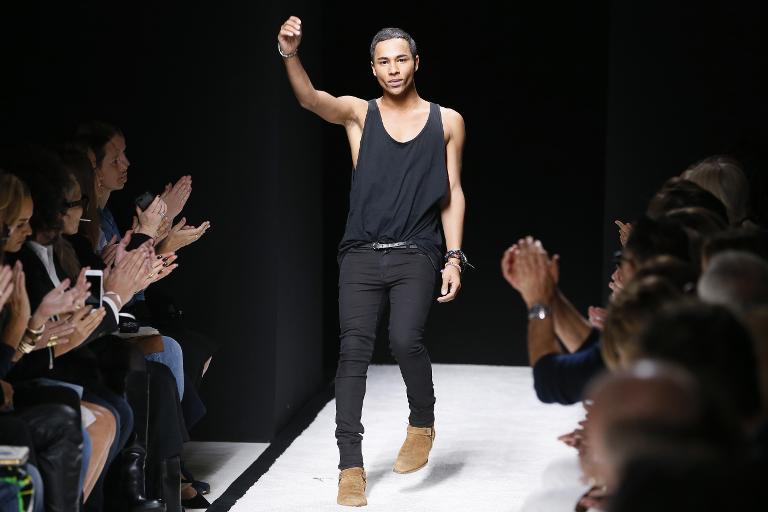 Men’s fashion takes centre-stage in Paris for five days from Wednesday, with Balmain’s first menswear show among the highlights on a packed schedule.

Taking over from last week’s menswear extravaganza in Milan, Paris men’s fashion week will see catwalk shows by some 50 labels including Valentino, Hermes and Louis Vuitton.

Saturday’s debut menswear show for French luxury label Balmain is one of the key dates ahead of Paris’ haute couture week, which starts on July 5.

Olivier Rousteing — the designer christened “Mr Popular” by Vogue — has brought glamour, sex appeal and strong silhouettes to Balmain since becoming the label’s creative director in 2011 at the age of just 26.

When he isn’t busy adding lashings of leather and embellishments to his creations, Rousteing can be found sharing snaps of himself with celebrity friends including Rihanna, Kim Kardashian and Kanye West with his 1.1 million Instagram followers.

His young fans are eagerly awaiting his new collaboration with high street chain H&M, which hits stores in November.

Balmain’s show will shine a spotlight on its men’s ready-to-wear line, which already accounts for 40 percent of its sales after launching in 2009.

The minimalist, high-tech brand, which Peter Strateas and Mario-Luca Carlucci launched with an autumn-winter 2012 collection, was a finalist for the prestigious Woolmark Prize in January for its men’s line, as well as being shortlisted in March for women’s ready-to-wear.

Lemaire — the brainchild of former Hermes womenswear artistic director Christophe Lemaire and Sarah-Linh Tran — will also be presenting a new menswear collection for spring-summer 2016. The brand has a collaboration with Japanese chain Uniqlo coming out next autumn.

New York streetwear brand Hood by Air, which has a cult following in the hip-hop world, will also be showing its menswear in Paris for the first time after presenting a women’s collection last year.

Style-watchers will have an eye on the new collection by Rick Owens — the designer who raised eyebrows in January when his male models strutted down the Paris catwalk in long tunics that revealed a flash of genitalia.

Belgian designer Kris Van Assche’s label is notably absent from the programme after he announced its closure last month, but he’ll be there as men’s artistic director for Dior, one of the must-see shows.

Fashionistas get a week to recover before the lights go back on for Paris’ haute couture fashion week, with 30 shows on the programme.

Schiaparelli’s show on July 6 is among the most hotly-anticipated events in the diary as French designer Bertrand Guyon makes his debut as style director.

Italy’s Fendi, meanwhile, will be marking 50 years of collaboration with artistic director Karl Lagerfeld, celebrating the milestone with a special fur collection on July 8.