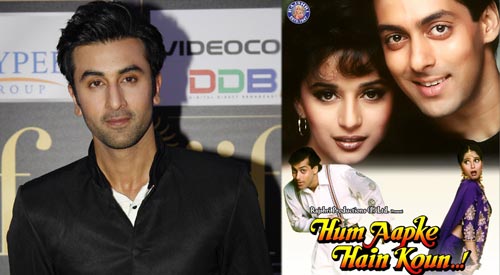 Remember Sooraj Barjatya? The man who gave so many blockbusters like Hum Apke Hain Kaun, Hum Saath Saath Hain and Vivah is all set to entice us with his upcoming film â€˜Prem Ratan Dhan Payo’, starring Sonam Kapoor and Salman Khan, who will be seen playing a double role.

Well, I have an awesome piece of news for all the diehard Rajshri fans.

According to latest buzz, Barjatya has decided once he gets free with his upcoming project, he will soon be starting up with the sequel of Hum Aapke Hain Kaun (1994), which starred Salman and Madhuri in the leading roles, but this time there will no Salman in the lead role as he has been replaced by Bollywoodâ€™s heartthrob Ranbir Kapoor.

â€œThe film had ended with Prem and Nisha getting married and the sequel will pick up from there. Barjatya will start working on the project soon. Contrary to rumours, Salman will not be seen in the lead role, but Ranbir. Barjatya will start the pre-production work only after locking the star cast,â€ the source said.

Though the actress, who will be seen playing Nisha (Madhuri Dixit)’s role is not finalised yet but Ranbir is Barjatya’s final choice for Prem (Salman Khan)’s role.

The source also added, ‘Hum Aapke… sequel will go on floors only after his current project releases. No other actor has been finalised yet, but Ranbir is definitely being considered for the lead role.’

Rajshri Productions are yet to confirm the developments.