Home Cityscape Off to Dhaka, on a bus! 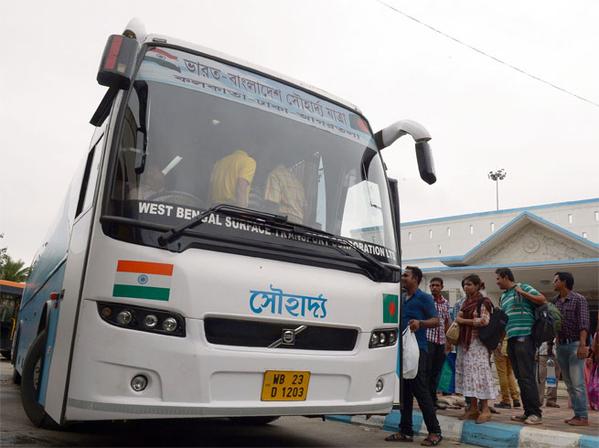 Kolkata: In what can be called the next step to boost bilateral ties between two nations, the Kolkata-Dhaka-Agartala bus service began its commercial operation from the Karunamoyee International Bus Stand at Salt Lake in Kolkata on Monday.

Of the 37 onboard, 32 are headed for Dhaka and the remaining five for Tripura.

“Thirty-seven passengers are onboard with 32 of them headed to Dhaka and the rest for Agartala. The number of passengers going to Agartala is expected to pick up as the service becomes popular,” West Bengal Surface Transport Corporation managing director Nilanjan Shandilya said.

According to bus driver Abhijit Bera, travel documents of passengers (including visa and passport) are checked at two places â€” the Benapole-Petrapole border and at Akhuara near the Tripura side of the India-Bangladesh border.

The bus service was launched by Prime Minister Narendra Modi and his Bangladeshi counterpart Sheikh Hasina in the presence of West Bengal Chief Minister Mamata Banerjee in Dhaka on June 6.

Earlier, it took nearly three days to travel from Kolkata to Agartala by road. Now, the travel time has come down to 18-odd hours.

Run by West Bengal and Tripura governments, respectively, the bus service will be available from Kolkata thrice a week â€“ Mondays, Wednesdays and Fridays â€“ and from Agartala on Tuesdays, Thursdays and Saturdays. It takes 12 hours to reach Dhaka and another six more to reach Agartala.