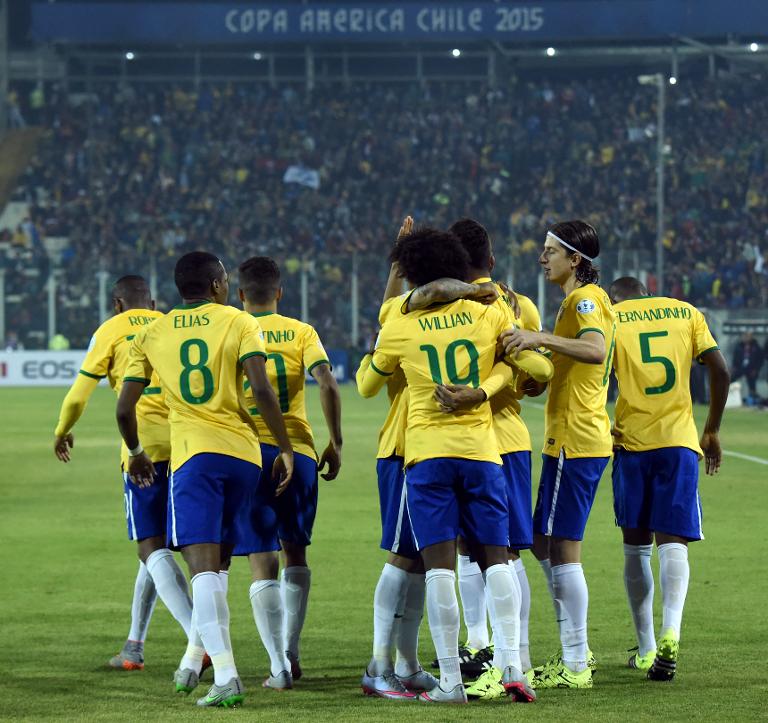 If Brazil are to win their fifth Copa America in seven editions, they are going to have to do it the hard way.

The South American super-power decided on Monday not to appeal a four-game ban handed to star striker and captain Neymar for violent conduct, meaning they will have to do without him for the knock-out stages.

What’s more, they are in a loaded draw that conspiracy theorists might be tempted to suggest had been fixed to help hosts Chile reach the final.

Argentina, Colombia and Brazil, the teams ranked third to fifth in the FIFA World rankings are all in the same side of the draw, while on the other side you find the likes of 61st ranked Peru up against 89th placed Bolivia.

In fairness, Chile (19th) are actually drawn in their quarter-final against the highest ranked team in their half, Uruguay, the defending champions ranked eighth by FIFA.

And it is Argentina and Colombia who have been hardest hit, as the two highest ranked sides face each other in the last eight.

Whichever negotiates that clash of the titans, they will expect to find Brazil in the semis as the Selecao are up against Paraguay.

Paraguay may have reached the final four years ago, just a year after making it to the World Cup quarter-finals, but they have been in freefall since, failing to reach last year’s World Cup and dropping to 85th in the world.

Ranked 15th after their World Cup 2010 exploits, Paraguay won only four out of 19 international matches from the beginning of 2013 until this tournament started.

Even without Neymar, Brazil will expect to progress and the team themselves are eager to exact revenge having lost to Paraguay on penalties at this very stage four years ago.

“Any team here is hard. Paraguay got to the last Copa America final and got there on merit, beating us along the way.

“Beating them on Saturday will have a special meaning.”

Paraguay are liable to provide stubborn resistance having already held both Argentina and Uruguay to draws in the pool phase, while beating Jamaica, albeit thanks to a comedy error by the Caribbeans’ goalkeeper Duwayne Kerr.

The quarter-finals begin on Wednesday with hosts Chile tackling Uruguay, whose form has been a bit patchy here.

Chile face perhaps their best ever chance to win this tournament — in which they have four times been beaten finalists, most recently in 1987 — not only playing at home but also blessed with a golden generation that beat Spain at the World Cup last year.

They certainly won’t be overawed by a side missing star striker Luis Sanchez, still serving a ban for biting Italy’s Giorgio Chiellini at the World Cup.

Edinson Cavani has yet to get off the mark for the shot-shy Uruguayans who mustered just two goals in three pool games.

On Thursday, the two outsiders Bolivia and Peru, both former winners of the competition, meet in Temuco while on Friday, Vina del Mar will be the setting for the heavyweight Argentina-Colombia clash.

Argentina have not exactly shone so far but with an attacking arsenal comprised of Lionel Messi, Sergio Aguero, Angel Di Maria, Javier Pastore, Carlos Tevez and Gonzalo Higuain, they will surely be expecting to end their 22-year wait to lift the Cop America.