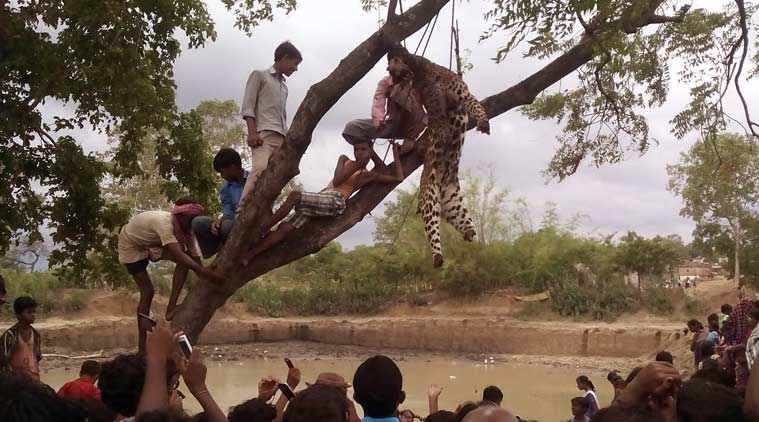 Despite enormous efforts to save the endangered species, tigers and leopards are being killed on a large scale. This, together with the decimation of their habitats and loss of natural prey due to hunting, has put them on the endangered list.

There is another incidence of leopard hunting which might shock you!

The gruesome killing of the leopard and the chopping off its body parts created a lot of criticism among everyone and now the forest officials have started a huge search operation in order to know the culprits who had chopped off all the four claws and the tail of a full grown female leopard after killing it brutally in Purulia.

The officials are also awaiting a post mortem report to learn the number of injuries the leopard had, said Divisional Forest Officer, (DFO), Purulia, Omprakash on Monday.

The injured carcass of the leopard was hung from a tree for public display with its four claws chopped off on Saturday.

The tail was also cut off from its root and taken away. The forest officials had to persuade the villagers for hours before they could retrieve the carcass and send it for post mortem, said DFO, Omprakash.

The forest tract shares a common border between Jharkhand and West Bengal.

In a report sent to the West Bengal government and to the Principal Chief Conservator of Forests, the DFO Purulia said on Monday that a forest department team had reached the village before the leopard was killed on Saturday afternoon.

They had guns in order to terrorize the leopard and also nets for capturing the animal. But they were not only outnumbered by a huge gathering of villagers â€“ a section of whom kept spreading rumours to whip up a frenzy for killing the animal.