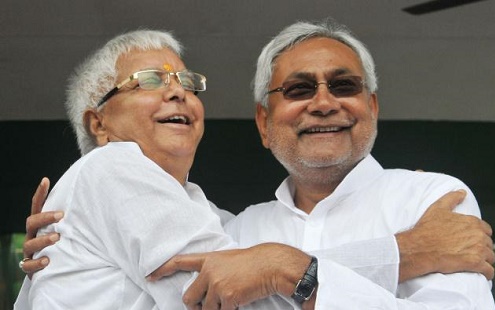 Patna: Chief Minister Nitish Kumar and RJD President Lalu Prasad on Tuesday came together at a platform for the first time after announcement of secular front for coming Bihar poll and promised to send BJP packing in state election.

The two who buried their hatchet to come together for Bihar poll targeted BJP and showed bonhomie among them.

The occasion was Hindustan Samagam Programme to discuss agenda for Bihar.

Earlier on two occasions, despite being scheduled, the two failed to share dais as Nitish Kumar skipped both functions apparently against RJD creating roadblocks in process of merger and later tie-up for Bihar elections.

Speaking first, Nitish Kumar hit at BJP and called it “worst practitioner” of caste politics in the country.

“While BJP accuses us of being ‘casteist’, the fact is that BJP’s politics is centred on caste and to gain votes its sparing no efforts to organise caste based meetings and convention,” Kumar said.

Kumar, who drove JD(U) to sever ties with BJP on June 16, 2013 over elevation of Narendra Modi as BJP’s prime ministerial candidate, made a mockery of saffron party’s claiming “share” in the good governance in the state since 2005 when NDA came to power in Bihar.

“They are claiming share in good works even in ministries which were not with BJP ministers,” Kumar said mocking the claim.

Kumar alleged that BJP was trying to whip “communal frenzy” with an aim to derive votes of majority section which was dangerous for the country.