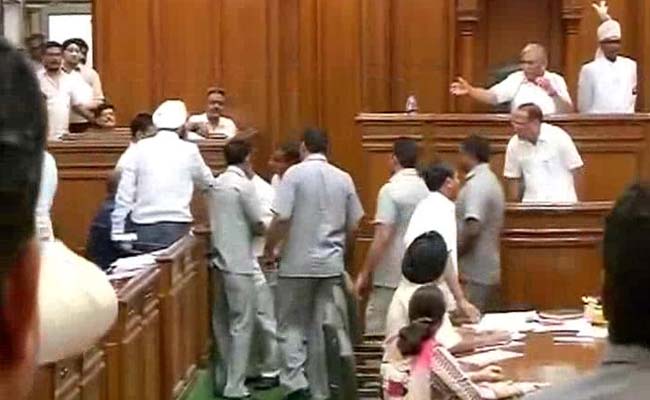 New Delhi: High drama was witnessed in Delhi Assembly on the first day of the budget session with Opposition trying to corner the AAP government over ex-law minister Jitendra Singh Tomar’s alleged fake law degrees even as Chief Minister Arvind Kejriwal launched a counter-attack on the BJP-led government at the Centre on the Lalit Modi controversy.

BJP MLA O P Sharma was evicted from the House after he tried to disrupt proceedings and walked up to the chief minister over Tomar’s degrees.

As soon as the House met, three BJP MLAs forcefully raised the issue of Tomar’s arrest and sought a detailed discussion on the matter which was rejected by Speaker Ram Niwas Goel.

Breaking his silence over Tomar’s alleged fake degree issue, Kejriwal said the Tri Nagar MLA was immediately removed from Cabinet after his arrest but wondered why Prime Minister Narendra Modi has not yet taken action against external affairs minister Sushma Swaraj and Rajasthan chief minister Vasundhara Raje over the Lalit Modi row.

He said he felt Tomar had kept him in dark over his degrees and asserted that no wrongdoing by anyone in his government will be tolerated.

“We have come to power to offer clean governance. We will not tolerate any wrongdoing. I do not have any relations with any MLA or minister. We immediately removed him (Tomar) from the Cabinet. If things that have come in the media are true, then I think I was kept in dark (about Tomar’s degrees),” Kejriwal said.

Targeting the NDA government, he said Modi must remove Raje and Swaraj for allegedly helping former IPL boss who is evading law enforcement agencies in India.

“The way we removed Tomar as soon as the matter came to light, I would request the Prime Minister to remove them from their respective positions and initiate probe against them.

The way I was kept in dark (by Tomar), I think the Prime Minister is also being kept in dark,” Kejriwal said.

The House was adjourned for 15 minutes following disruptions by the BJP immediately after it met. When the House met again after the adjournment, BJP MLA Sharma tried to disrupt the proceedings. He first came to the Well of the House and then walked up to Kejriwal and interrupted him when he was giving a statement on the issue.

“The way Om Prakash came from his seat and ran towards the chief minister is not acceptable. I gave a chance to talk and even adjourned the house for 15 minutes. When the chief minister was answering then why not listened to him? I can take strict action against him,” the Speaker said.

BJP Legislature party leader Vijayendra Gupta also came down hard on the government accusing it of misleading people of Delhi on various issues.

The AAP MLAs rebutted BJP’s criticism and vociferously referred to the visa row.

The Budget will be presented on June 25.