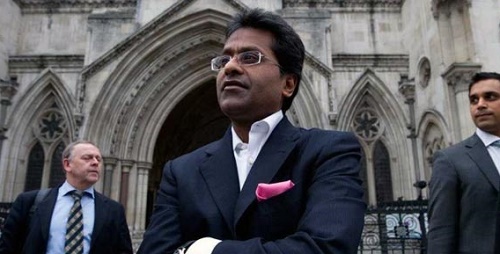 He urged the government to take all measures to bring him back to India to face the law.

Singh’s strong comments are the first public criticism by a ruling party MP against the help extended to Lalit Modi by External Affairs Minister Swaraj and Rajasthan Chief Minister Raje, an issue which has snowballed into a major political storm for the Narendra Modi government even though BJP has defended both the leaders.

“If anybody helps a ‘bhagoda’ (fugitive), it is wrong.

This is wrong legally as well as morally. If anybody meets a fugitive, it is absolutely wrong. Whosoever has helped him, I think it is completely wrong,” Singh, a former Home Secretary, told reporters here.

He said Lalit Modi had been evading judicial warrants and summons and he was clearly a fugitive and any help given to him or any meeting with him was wrong.

He did not name either Swaraj or Raje.

Asked if Lalit Modi was being “saved”, Singh said the departments concerned should be doing their job.

“I have given my view,” he said when asked about BJP’s defence of both the leaders and added that he would not like to name individuals.

Singh said the government should appeal against the Delhi High Court order which restored the former IPL commissioner’s passport and demanded that his property should be attached, if needed.

“All measures should be taken to bring him back to India so that he faces the law,” he said.

Swaraj and Raje have been facing flak for helping Lalit Modi in procuring travel documents in the UK, a country which he has made his home to avoid legal processes in India.

Modi, 49, travelled to London in 2010 after the Indian Premier League (IPL) became embroiled in allegations of match-fixing and illegal betting.