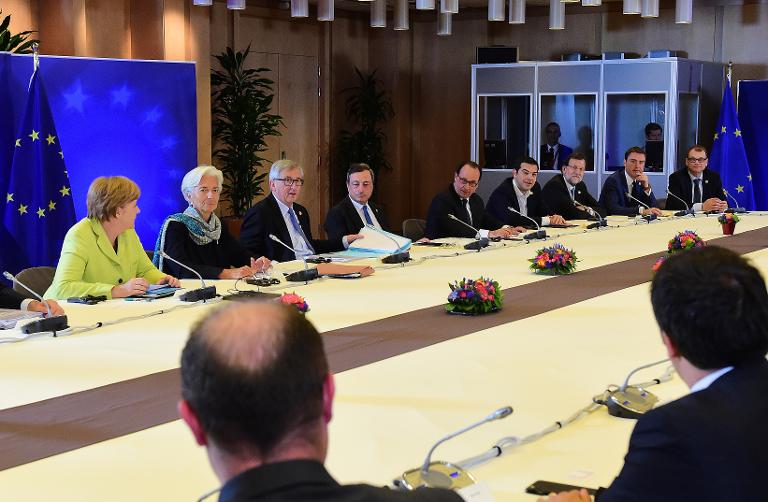 Greece’s international lenders raised hopes for a vital bailout agreement this week to save Athens from default and a possible euro exit, despite warning no deal was likely at an emergency summit on Monday.

Eurozone leaders were cautiously optimistic about the eleventh-hour reform proposals from Greece as they met Prime Minister Alexis Tsipras in Brussels, even if finance ministers failed to make a breakthrough earlier in the day.

Athens stocks closed up 9.0 percent and Europe’s main markets all surged on hope of an end to the five-month standoff between the leftist Greek government and its EU-IMF creditors before a deadline on June 30.

“It is a welcome step and a step in a positive direction, so I think it is also an opportunity to get that deal later this week”, said Jeroen Dijsselbloem, the head of the Eurogroup of eurozone finance ministers.

The Dutch hardliner said however that more work was needed and the Eurogroup would probably have to meet again later this week, before another summit of all 28 EU leaders on Thursday.

EU President Donald Tusk said the proposals were the “first real proposals for many weeks” from the Greek government which has resisted calls by creditors for further cuts to pensions and changes to VAT.

But Tusk warned of the consequences of failure, with Greece at risk of defaulting on a 1.5-billion-euro ($1.7-billion) IMF payment on June 30 if it fails to get a deal to extend its international bailout by the same day.

“The most important thing is that the leaders take full responsibility for the political process to avoid the worst case scenario, which means uncontrollable, chaotic ‘Grexident’,” Tusk said, using the term for a failure to prevent Greece leaving the euro.

The Greek proposals sent to Brussels overnight were a last-ditch bid to unlock the final 7.2 billion euro tranche of its international bailout, which creditors have refused to release unless Greece agrees to more austerity measures.

Greece needs the money to pay the International Monetary Fund, one of its three bailout monitors along with the European Commission and European Central Bank.

French President Francois Hollande said there had been “improvements even if not everything is in order” but there was no chance of a deal at the summit, called specially by Tusk.

German Chancellor Angela Merkel made the mood even cooler than the rainy Brussels weather, ruling out a deal because of the failure of the finance ministers to make progress earlier.

“There is no basis for a decision. This can only be a consultative summit,” she said in a curt statement to reporters.

Growing fears of a bank run in Greece amid a huge outflow in deposits prompted the ECB on Monday to inject more emergency funding into Greek banks to cover withdrawals.

Tsipras was elected in January promising to end five years of austerity caused by bailouts, and his office said Monday the new offer still refused to make concessions on key red lines, including on budget targets, pensions and increasing the VAT on electricity.

“We’re here to conclude a viable economic accord,” Tsipras said as he arrived in Brussels.

His economy minister Giorgos Stathakis told the BBC that Greece’s creditors had broadly accepted the proposals, which included new taxes on businesses and the wealthy but not pension cuts.

He added that he expected a “very positive communique” from the eurozone summit, although Brussels officials said no such statement was expected.

Several demonstrations backing Greece’s stand against more austerity measures were held in European capitals including Brussels, Berlin, Rome and Paris over the weekend.

Failing a deal, Greece is likely to miss the IMF payment of around 1.5 billion euros, setting up a potentially chaotic “Grexit” from the eurozone, which Greece’s central bank has said could also see it cast out of the EU.

The EU’s involvement in Greece’s bailout, which was to provide 240 billion euros in loans in exchange for drastic austerity measures and reforms, runs out at the end of this month, but IMF support is scheduled to continue to March 2016.