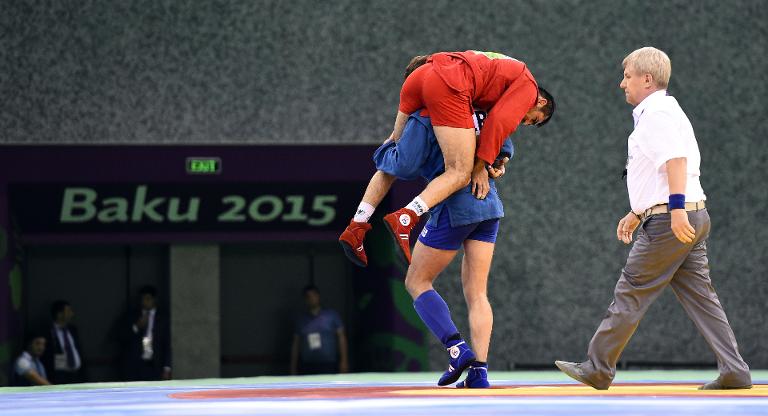 Sportsmanship and camaraderie shone through in the sport sambo competition on Monday at the European Games as Belarus’ Stsiapan Papou carried his injured Azerbaijan opponent Amil Gasimov off the mat in Baku to loud applause after having beaten the world champion in the final.

It was the sort of gesture and dramatic moment that the sambo enthusiasts would have been hoping for as the sport — a mix of of various martial arts including jujitsu, greco-roman wrestling and judo — made its debut on a wider international stage than it has been previously accustomed to.

Papou — who was one of two sambistas from his country to win gold on an electric night of sambo action watched by a noisy and knowledgeable crowd of 5,000 — was well in control of his -74 kilogrammes final and all but sealed victory with an agonising looking leg clamp of Gasimov’s Achilles.

Gasimov, who was one of a sad succession of four sambistas from the host country who failed to deliver gold in their finals in front of the watchful gaze of Azerbaijan President Ilham Aliyev, had been carrying a leg injury into the final and had to give into the inevitable.

Then came the extraordinary gesture by Papou — who showed a softer side that hardly reflects the origins of a sport which stemmed from the early years of the Russian Revolution in order to toughen up the Red Army and the feared Soviet Police the NKVD — as he lifted Gasimov onto his shoulder and carried him off the mat.

The fallen Azerbaijani sambista was then taken out of the arena in a wheelchair and Papou was on hand to help him on and off the podium for the medal ceremony to boot.

“In Azerbaijan, sambo is more than a sport. Everybody was supporting him and he just didn’t want to give up,” said 31-year-old Papou, an avid book reader in his spare time when he is not pinioning opponents to the mat.

“We went on the ground and I was in control all the time. He tried to get me, but I was sitting on his Achilles heel.

“I did that (carrying him off), because I know how much it hurts. I’ve lost that way before and I know the pain.”

Gasimov for his part said that Papou’s sportsmanship was typical of the atmosphere that reigned in the sport.

“We met before in the World Cup in Russia, and then I beat him in the semi-final match,” said Gasimov.

“But today I couldn’t wrestle as I would like.

“But we know each other well because we have met a lot of times, on the mat we are rivals, but after the bout, outside the mat we have good relations.

“It is sport, so I think it is normal that he tried to help me to stand and carried me to the hall,” added the 29-year-old.

Gasimov denied he had been foolhardy to take part in the final despite suffering the injury, as he had not wanted to let the home support down.

“I prepared very well, very strongly for competition. But in the semi-final bout I suffered an injury in my leg, but tried to hide it, not to demonstrate it,” he said.

“The doctors helped me, and in final I tried not to show my feelings and injury.

“But he made a painful hold on my injured leg. I try to bear it and not to give up to the painful technique, but unfortunately I could not. It was hurting me too much.”

Whilst Gasimov’s misfortune summed up Azerbaijan’s night it was all gold for Russia as the team — which is well funded at the orders of President Vladimir Putin — swept the board winning all five of the finals they were involved in.

France’s Sarah Loko may not have won gold but she certainly reacted as if she had as she was one of the few sambistas from western Europe to challenge the eastern supremacy after winning bronze in the -64kg category.

“I am going to drink champagne, meet up with my boyfriend (a coach on the German judo team) and get up to something with him in the centre of town.”