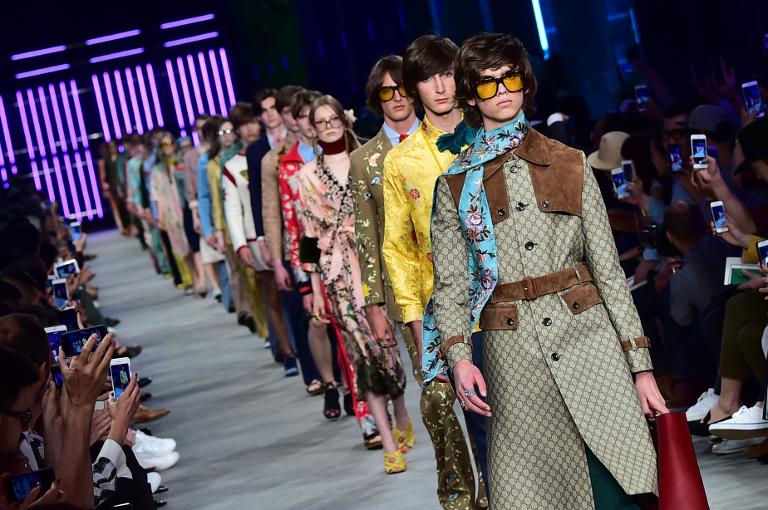 Male fashion followers will be sporting distinctly androgynous looks next year if some of the Spring/Summer 2016 catwalk shows in Milan are a guide — even if Giorgio Armani resisted the trend.

Armani brought Milan’s menswear fashion week to a close on Tuesday with a collection dominated by “soft, almost liquid” silhouettes that was unveiled with Robert de Niro among the front row VIPs.

Trousers were frequently baggy and pleated, as were three-quarter length shorts, as Armani marked 40 years in the business with a collection that bore all of his hallmarks.

Spearheading a trend towards a blurring of the lines between men’s and womenswear across many of the collections unveiled in Italy’s home of fashion was Gucci.

The Florence-based house has been taken in a radical new direction by Alessandro Michele, the former handbag designer who took over as creative director following the sacking of Frida Giannini at the end of last year.

To a soundtrack of Gregorian chanting, Michele sent out a stream of models in pastel-coloured silk blouses and lace shirts that would not have looked out of place at a 1970s music festival.

It was a collection Michele pointedly depicted as a break with the brand’s reputation for playing it safe.

“DÃ©tournement is the opposite of quotation,” said the typically cryptic press notes, borrowing a phrase from theorist Guy Debord and the French word for a diversion.

It was certainly that: traditional male dressing codes have been diverted to the point that they are borrowing women’s clothes, fabrics and favourite accessories.

Only time will tell if Gucci’s gamble on a younger, more daring vision of one of the world’s most valuable luxury brands will pay off.

But the initial reaction in the specialist fashion press and in the increasingly important blogosphere to Monday’s show appears to have been quite positive.

“The press has been gentle on the unassuming Michele, embracing his daring neo-dandyism and recognizing his influence,” Women’s Wear Daily noted, before adding the killer question: “But what will customers say?”

Italian label Etro also borrowed from a range of colours that have traditionally been the preserve of womenswear — electric blue, golden yellow and dirty pink among them — for a collection that designer Kean Etro said had been inspired by the egg, “the symbol of male and female union.”

At venerable Italian house Canali, tradition was updated rather than thrown out under designer Andrea Pompilio’s vision of “a never-ending Mediterranean summer” in a collection that relied heavily on featherweight fabrics including organza, Egyptian cotton and a linen-silk-wool mix, and featured models carrying vintage mini-suitcases as handbags.

The trend towards a de facto merger of men and women’s clothing was underlined at the weekend by a Prada collection in which soft silk shirts, worn open to the belly button or lower and partially tucked-in, featured repeatedly.

As if to drive home the point, Miuccia Prada also used her menswear show as an opportunity to show off a string of items from her womenswear collection.

In the words of Stefano Pilati, head of design at Ermenegildo Zegna, the key to the feminised look is restrained application. Today’s fashion conscious man is “romantic but sure of himself, strong and with an almost feminine attitude,” he says with a marked emphasis on the “almost”.