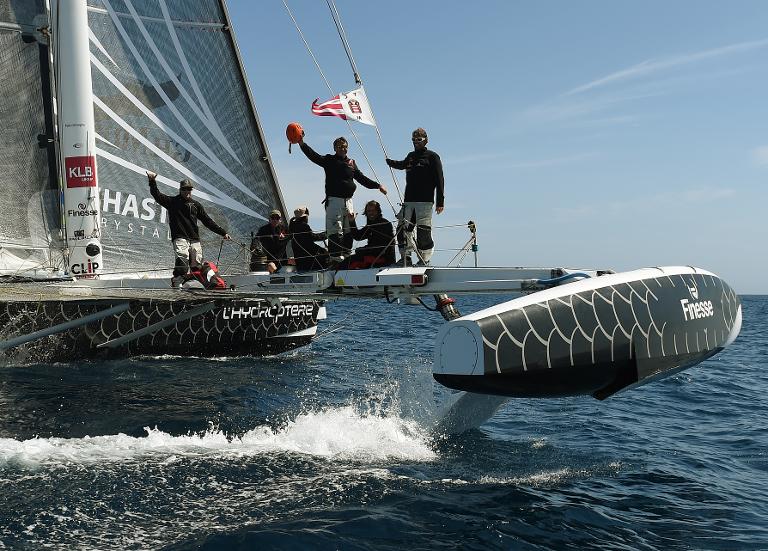 French adventurer Alain Thebault has pushed off from Los Angeles in his trimeran sailboat in a bid to reach Hawaii in record time.

The “Hydroptere,” a hydrofoil supercraft, can accelerate to around 30 knots. Such speeds take the hull completely out of the water and stand the 18-meter boat on three foils that slice through the waves.

Thebault, who set off Monday with his crew from San Pedro, California, will try to reach Hawaii in less than the four days, 19 hours and 31 minutes put up by Olivier de Kersauson in 2005.

“It’s not impossible that we beat the record, but there have been difficulties before, it is better to remain humble,” Thebault said.

“It’s still a prototype, it has already crashed four times,” he added minutes before casting off on Monday.

The Hydroptere has already beat one speed record, sailing more than 50 knots an hour on flat water.

It can break the record if it pushes the limit, Thebault said.

“What matters is arriving by boat that flies to Hawaii,” Thebault said.

He plans to join the solar-powered Solar Impulse aircraft in Honolulu in a symbolic gathering of clean energy crafts.

The Swiss-piloted aircraft is leaving from Japan and headed to the Hawaiian islands.

Thebault and a crew led by Jacques Vincent, a veteran of eight round-the-world voyages, expect to encounter three meter swells behind Catalina Island and then traverse a Texas-size patch of floating garbage in the Pacific before reaching Honolulu.

The 52-year-old Breton sold his house to finance the trip and says he doesn’t have a plane fare home from Hawaii.

But Thebault is working on another prototype of a multi-hull hydrofoil capable of reaching speeds of 80 to 100 knots (150 to 180 kilometers or 95 to 100 miles) per hour, and a commercial version capable of speeds of 25 to 30 knots.