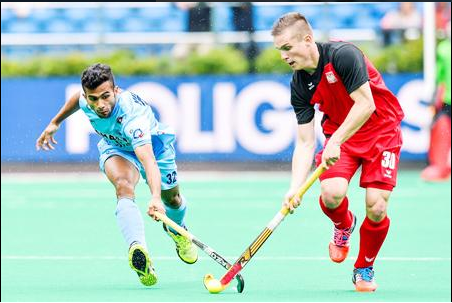 Antwerp: India produced a much-improved show than their opening match as they post a facile 3-0 victory over Poland to notch up their second consecutive win in the Hockey World League Semifinals in Antwerp on Tuesday.

Walmiki brothers, Yuvraj (23rd minute) and Devinder (52nd) got their names on the scoresheet with flash goals and captain Sardar Singh (41st) sounded the boards with a firm reverse drive to secure India’s win at the KHC Dragons Stadium.

India had launched their campaign with a 3-2 victory over France on the opening day.

Breezy conditions and 16 degree Celsius temperature seemed to be to Poland’s liking and they did well to frustrate the Indian strikers in the first session, not allowing them a decent look at the goal.

Crowding their defence, the Polish players were able to frustrate the Indian strikers for long, and in turn banked on long-passes from their territory to build up some brisk counters. But in the end, the Indians found ways to break down the crowded Polish defence to pump in three goals.

It was Poland who earned th first penalty corner in the 20th minute, but captain Pawel Bratkowski’s rising drag-flick was palmed away by goalkeeper P R Sreejesh.

Yuvraj opened the scoring for India as he capitalised on a lucky break in the 23rd minute, when a long diagonal ball deflected towards him off a defender’s stick and he made no mistake in flicking it past the hapless goalkeeper.

India impressed little with their three penalty corners in the absence of Rupinder Singh, who is recuperating from an injury suffered in the warm-up matches here.

Sardar increased the lead in the 41st minute with a stinging reverse drive from the top of the scoring circle into the left corner of the goal.

Devindar Walmiki then scored his second goal in successive matches in his debut tournament by deflecting in a diagonal ball from Chinglensana Singh in the 52nd minutes.