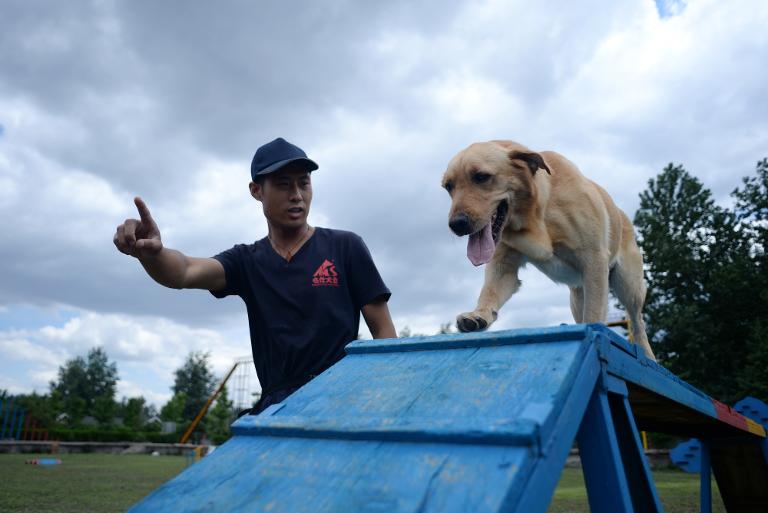 Tongue drooping as he leaps over rainbow coloured obstacles and through metal hoops, “Little Seven” is put through his paces at one of China’s dog training camps.

The two-and-a-half year old Labrador has even been trained to use a white porcelain toilet at the Mingshi Dog Industries training school, one of several in China’s capital Beijing.

Pet ownership has grown rapidly in the country over the past decade, with almost 30 million households now owning a dog, according to research group Euromonitor.

The canine boom has boosted a wealth of sideline industries — including facilities such as Mingshi, where owners can leave their pooches when they go on holiday.

“He can understand commands from anyone. He’s basically like a person, but can’t speak,” Zheng Chun, of the school’s marketing department, told AFP about the golden haired dog.

It’s not all about celebrity pets. Owners dispatch their charges to the facility in the hope they will become more obedient, she added.

On a visit to the school this month, AFP saw trainers scrubbing the animals in metal sinks, before putting them in sunlit concrete compartments for a rest.

German Shepherds, Bichons Frises, and poodles resembling Teddy Bears all live at the facility, which has about 150 residents, she said.

“After training the dogs are very skilled. They will listen to their master’s instructions, just like a child in school,” she added.

“We deeply oppose the dog meat festival. My friends online all oppose it,” she said of the event, held on Monday.

Of the training camp, she said: “We aspire to be the most professional and humane in China.”