Home Politics Beware! Didi's brat will scoop your eyes out! 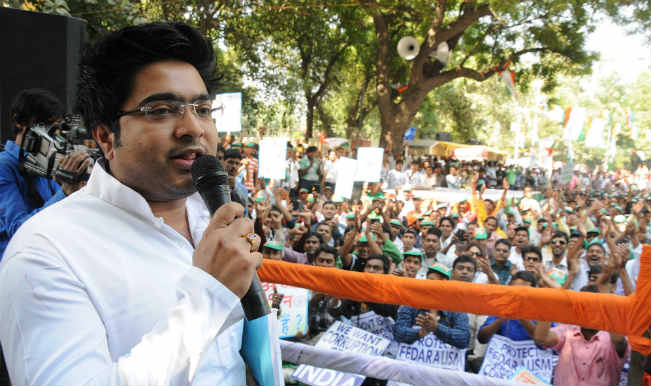 Kolkata: Abhishek Banerjee is not just any ordinary TMC MP; heâ€™s Didiâ€™s nephew. He has kicked up a new storm by saying that those who dared to challenge the TMC administration will have their eyes gouged out and their hands chopped off. Thanks to this statement, Mr Banerjee has earned himself an FIR. Whoa!

“Those who dare to show their eyes, we will tear it out and throw it on the streets. If someone shows us their hands we will cut them off. But you have to remember that in democracy, it is the common man who will say the last word,” Abhishek Banerjee said on Monday while addressing a meeting in Basirhat area of North 24 Parganas.

“Most political parties have fallen on the feet of Narendra Modi but TMC didn’t,” Abhishek Banerjee added.

Head of the youth wing of Trinamool Congress faced severe criticism on his comment from the other political parties. “I think Abhishek Banerjee has been making such highly provoking speeches earlier also. There should be a case registered against him. He should not indulge in any such speeches being a Member of Parliament. Threatening the people to vote for Mamata shows that she does not have believe on the work she has done and that the BJP has emerged has a competition to TMC,” BJP spokesperson GVL Narasimha Rao said.

“The comments are the reflection of the DNA of Trinamool Congress. This is what is expected of TMC and its leaders,” BJP national secretary Siddharth Nath Singh said.

“I am not surprised by the statement. This is their ideology and mindset. Several TMC leaders had earlier spelt it out. Now Abhishek has said it,” Chakraborty said.

A history of offence

This isnâ€™t the first time that the TMC has courted controversies thanks to its statements.

In June 2014, TMC MP Tapas Pal was caught on tape threatening to let loose rapists on his opposition.

In May 2012, Mamata Banerjee stormed out of the stage without answering questions from the audience. Taniya Bhardwaj a Presidency University student, along with the entire audience was openly accused of being CPI (M) cadres and Maoists for asking the question during the session.

In April 2012, Ambikesh Mahapatra, a professor of Jadavpur University was assaulted, then arrested and forced to spend a night in police custody for allegedly circulating â€˜defamatoryâ€™ cartoons of Mamata Banerjee.