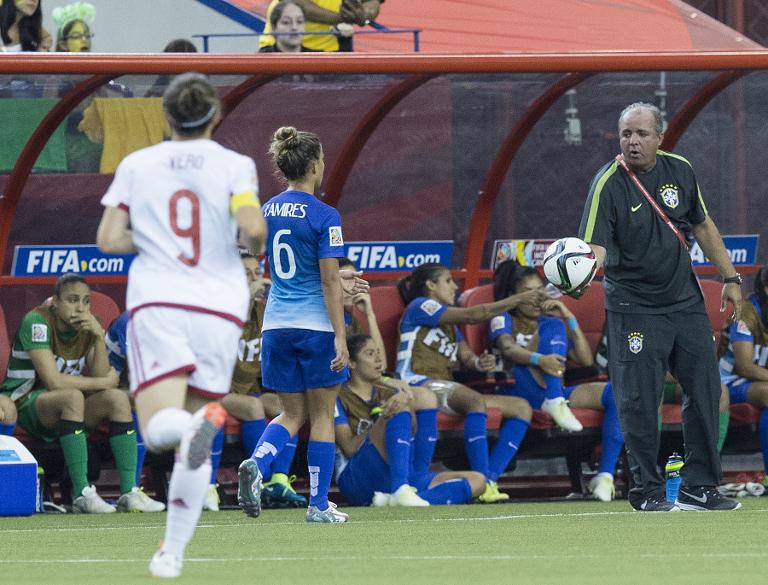 Brazil coach Vadao has warned that the lack of attention paid to the women’s game could cost them an Olympic gold as his team lead by superstar Marta suffered yet another World Cup upset.

As their men shrugged off the absence of suspended captain Neymar to reach the Copa America quarter-finals, women’s skipper Marta and her teammates were packing their bags in Canada.

Marta, 29, claimed a record 15th World Cup goal but the former five-time world player of the year returns home without the ultimate accolade.

A second-half goal from Kyah Simon in wet and windy Moncton was enough to end Brazil’s campaign and send Australia through to the quarter-finals 1-0.

“We asked the Brazilian football federation if we could have a permanent team so we can practice more,” explained Vadao.

“In Brazil the (women’s) championship does not offer the right conditions or give us the opportunity to test our athletes and this was proven here.”

Brazil are two-time Olympic silver medallists with dreams of winning gold at home in 2016.

But Vadao warned: “We have the Olympics coming up in Brazil. We need obviously to concern ourselves a bit more.”

Brazil’s long wait for World Cup glory stretches back to their 1991 debut opening round exit in China.

Third place at USA 1999 appeared to suggest a title was coming within reach but the 2007 final heartache meant it was back to the drawing board and in 2011 they went home at the quarter-final stage.

The 2015 tournament has a last-16 round for the first time as it has been expanded to 24 teams.

Brazil changed its approach under Vadao who took over in April last year to prepare for this World Cup, implementing a residential programme since February.

But Marta did not join up with the group until before the tournament.

The South Americans had nevertheless gotten off to a flying start in Canada when Marta overtook Germany’s Birgit Prinz as the holder of the most World Cup goals with 37-year-old Formiga becaming the oldest scorer in the tournament’s history.

They won all their group matches without conceding a goal, albeit against lower ranked opposition — Spain, Costa Rica and South Korea.

Simon’s goal was the only one conceded.

“Even now in defeat we are convinced we have the best attitude, physically we are one of the best teams,” said Vadao.

Now 29, Marta, dubbed by Pele himself as “Pele in skirts”, looks set to finish her career without a world title.

But her constant struggle to survive in the sport she loves saw her break down in tears in a recent Brazilian television documentary.

Marta has regularly called for more recognition for the women’s game in Brazil.

Now based in Sweden, she is just one of a handful of players on the Brazilian team who play abroad — defender Poliana and striker Rosana at Houston Dash; defender Rafaelle at FC Kansas City and striker Beatriz at South Korean club Hyundai Steel Red Angels.

“Marta only had the end of preparation. We have players who are technically good but we need to train in a more efficient manner,” the coach said.

“Brazilian football needs to prepare better just like other countries do.

“Tactically we’re good, the only thing that went wrong was that we didn’t score a goal (against Australia).”

Despite defeat praised his players, in particular the performance of veteran Formiga.

“Formiga is still one of the great examples of Brazilian football and she will go with us to the next Olympics.”