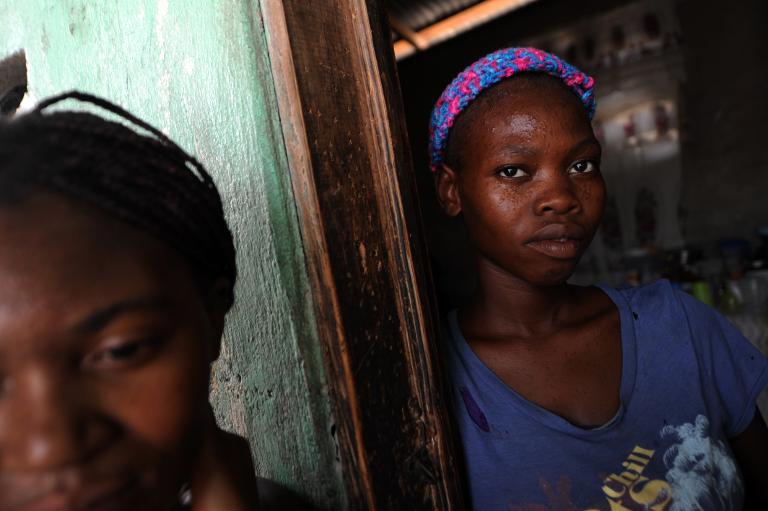 Mileyda Benacio is 19 years old, seven months pregnant and effectively stateless — expelled from the Dominican Republic, the land of her birth, to neighboring Haiti.

Her T-shirt is tight across her burgeoning bump and she has little else to her name as she shelters at a Jesuit mission with the first victims of an immigration crackdown.

Benacio was born in the eastern half of the Caribbean island of Hispaniola, the Dominican Republic, but her late parents hailed from the west, Haiti, and therein lies her problem.

Thousands of Haitians once crossed the border to seek work, and tens of thousands of their children grew up in the Dominican Republic without ever being granted citizenship.

Now they have papers for neither country, and are subject to detention and expulsion from the relatively prosperous though economically divided east to the impoverished Haitian west.

“My father and mother were illegals in the Dominican Republic and didn’t follow the procedure to get me papers,” Benacio told AFP, sitting in a Haitian school yard.

“I have nothing, not even a change of clothes. I’m seven months pregnant, but I don’t know where to go when I go into labor, and I’ll have no clothes for my baby.”

Many foreign governments and NGOs have raised the alarm about the threat of a new human disaster in a country still recovering from an earthquake and a cholera outbreak.

But the Dominican government has not budged, and so far there is little infrastructure on the ground in Haiti to welcome what could become 200,000 destitute refugees.

In October 2013, the Constitutional Court controversially ruled that children born to undocumented immigrants in the Dominican Republic are not Dominican citizens.

This decision — retroactive to 1929 — left around a quarter of a million people effectively stateless, the vast majority poor blacks, locally-born but of Haitian descent.

Haitians are 90 percent of the Dominican Republic’s immigrants and 5.4 percent of the total population. Just one in 10 has legal status, and many face racial discrimination.

Under pressure from the international community to resolve the issue, President Danilo Medina launched the “National Plan for the Regularization of Foreigners (PNRE).”

But undocumented immigrants have only until 7:00 pm (2300 GMT) Wednesday to hand in the initial paperwork — an identity document from Haiti, an address and a phone number.

And few of those like Benacio, who was born in the town of Barahona in the Dominican Republic, can provide those things.

“When the registration program began they gave me a bunch of appointments at various offices, but my dossier went nowhere,” she complained.

Then, she was caught up in a sweep by the Dominican army, and deposited at the Haitian border crossing at Malpasse, just west of the Dominican town of Jimina.

Jesuit priests are doing what they can for the 40 or so refugees who have arrived so far and are squatting as best they can in the three classrooms of a dilapidated school.

There, Souverain Saint-Soi lies on a simple blanket on the ground, cradling one of his four young children, seemingly at a loss.

“I came to the Dominican Republic with one of my aunts when I was seven years old. She ended up making her own way and I became a street hawker,” the now 35-year-old told AFP.

He too applied to the PNRE program.

“On my first appointment they gave me a little paper card. But on my second, the boss said it wasn’t the right one. He ripped it up and threw it in my face,” he said.

“I gave up, since they just seemed to want to steal more and more money from me,” he said.

Now Saint-Soi, his wife and four children don’t know where to go. They no longer have any family in Haiti.

At least Brevil Meristil still has Haitian citizenship, but his expulsion was nonetheless a brutal shock, he explained as he stood by the roadside after being escorted across the border by Dominican immigration officers.

“I came because there was no work in Haiti. I worked the land for 15 years,” he said, amid the dust thrown up by the flow of trucks bringing imports from his former employers.

Some families did not wait for the troops and police to come to them, fleeing in taxis overloaded with mattresses, washing machines, pots, pans and sacks of rice or beans.

An elderly woman complained that Dominican authorities want to kick out everyone with black skin before her son — keen to return to work once she is safe — hushes her.

Meristil is under no illusions about a return but he has few other options. “I have no family here. The Haitian state is my family now,” he said.

President Michel Martelly has declared that Haiti will “stand up to receive the return of its brothers in dignity,” but there is little evidence of this determination on the border.

Land has been selected to build a repatriation camp and a sign has gone up, but the site is manned by one armed guard, sitting in front of a collection of unused construction vehicles.