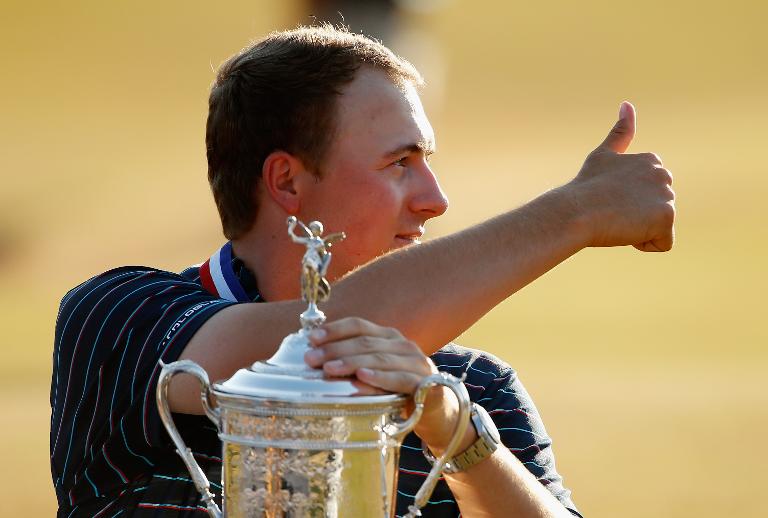 Jordan Spieth continued his breakout season Sunday, following up a historic Masters triumph by emerging from a crowded leaderboard in the final round to claim his first US Open crown.

Spieth fired a closing one-under 69 for a five-under 275 total, denying a first time major win for Johnson, who suffered a heartbreaking defeat after he three-putted on 18, including a missed four-footer to force a playoff.

“I didn’t expect the next one [major championship] to come this soon,” said Spieth, who made some clutch putts down the stretch. “I am still amazed that I won.”

The world number two Spieth is fast becoming the posterboy for American golf over the fading Tiger Woods, as he became the first player to capture the Masters and US Open in the same year since Woods did it in 2002.

Spieth is the youngest champion of the US Open since the legendary Bobby Jones in 1923 and the youngest player to win two career majors since Gene Sarazen in 1922.

Spieth used all the tricks in his bag, but the biggest ace up his sleeve Sunday was his caddie Michael Greller who started his career at Chambers Bay.

“I think it will sink in a little quicker than the Masters given it has already happened, but boy, what a team effort,” he said. “I didn’t have my best stuff but we were able to get it done. Michael knew this course better than anybody playing this week. “

Johnson shot a 70 for a four-under 276 total to finish in a tie for second with Oosthuizen, who had a sizzling 67.

Australia’s Jason Day courageously battled vertigo through the final three rounds, to shoot a closing 74 and finish at even-par 280, five strokes back of Spieth.

For the first time since 1973, four players headed into the final round with a share of the lead, comprising Spieth, Day, Johnson and Grace.

The long-hitting Johnson appeared to be ready to conquer the Chambers Bay course and claim a first major championship that many believe he was long overdue for after having come close in all four Grand Slam tournaments.

Playing in the final pairing, Johnson reached the par-five 18 green in two and had a 12-foot eagle putt to win.

He missed his eagle and then had a four-foot putt at the last to force an 18-hole playoff on Monday but missed that one as well.

“Disappointed. I played really well, I didn’t make any putts today,” Johnson said. “I did everything I could. I tried my damndest to get in the hole. I just couldn’t do it.”

Much criticised over the week by many players for its fiery fairways and bumpy greens, the links-type Chambers Bay course was again set to be a monster challenge at 7,384 yards. And conditions were perfect Sunday as they had been throughout the week.

The biggest mover of the day Sunday was world number one Rory McIlroy, who shot a four-under 66.

McIlroy, who won the two majors prior to the two of Spieth, started the day eight shots off the pace and at one point on the back nine got to within two of the leader.

“I played a great front nine,” McIlroy said. “Instead of making two birdies on way in I made two bogeys which was disappointing.”

Day instantly became the crowd favourite after a frightening vertigo attack near the end of his second round that caused him to collapse in front of the ninth hole grandstand.

He was still suffering in the final round, but soldiered on to remain in contention and finish with three birdies, five bogeys and a double bogey.

“I hit 13 greens and just didn’t capitalize on all the stuff I had,” Day said. “I am just glad I got in on the weekend.”

The 27-year-old Grace battled Spieth down the stretch but the South African slumped badly on the 16th hole, finishing with a double bogey to Spieth’s birdie for a crucial three-shot swing.