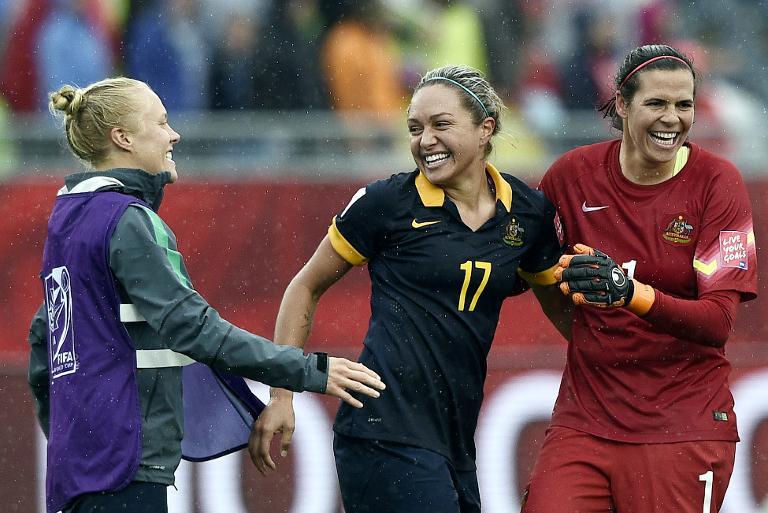 A second-half goal from substitute Kyah Simon put Australia through to the quarter-finals of the Women’s World Cup on Sunday at the expense of star-studded Brazil.

Simon, 23, got the breakthrough after 80 minutes in wet and windy conditions in Moncton against the 2007 runners-up captained by former five-time world player of the year Marta.

“I think exhilarating is the word for such a victory against a big, powerful football nation,” said coach Alen Stajcic of Australia’s first win in a knockout round at the World Cup.

“Brazil had a couple of chances but overall I thought we deserved to win.

“But we don’t want to get ahead of ourselves. We’re still halfway through, it’s back to work tomorrow.”

Both teams fought to break through in a tight first half with Marta, Andressina and Formiga all missing the target for the seventh-ranked Brazilians.

Formiga, 37, who became the oldest player to score in the women’s tournament in their first game, had Brazil’s best chance of the first half but her curling effort was tipped over by goalkeeper Lydia Williams.

But the came to life around the hour mark.

Marta, 29, missed another chance to add to her World Cup record 15 goals when she hit wide, as a Formiga header bounced back off Williams’ near post.

The Matildas broke straight up to the other end, with captain Lisa De Vanna teeing up Emily Van Egmond, but her strike was deflected.

Stajcic brought on Sydney FC player Simon after 64 minutes and it paid off with ten minutes to go.

Melbourne forward De Vanna had her shot punched out by Luciana in the Brazil goal straight into the path of the onrushing Simon.

It was her third goal of the tournament — and first conceded by Brazil in Canada — after her stunning double against Nigeria in the group stage.

“Being in the right place at the right time is what makes great players and Kyah Simon showed that today,” said Stajcic.

“Our team’s battle hardened and you could see that. We had three very tough games. If they keep growing they can beat anyone.”

It is the third time that Australia have reached the quarter-finals after 2007 and 2011, but they had never won a knockout round match before.

The World Cup has a last-16 round for the first time as the tournament has been expanded to 24 teams.

“Super proud is how I would sum it up,” said defender Elise Kellond-Knight, named player of the match.

“A sense of satisfaction we’ve worked so hard for this. Pride at having won a sudden death game at a World Cup, super satisfied at the performance we put on.”

Australia next play either reigning champions Japan or the Netherlands in Edmonton for a place in the semi-finals as Brazil again return home still waiting a maiden title.

Brazil, two-time Olympic silver medallists, were hardly tested in their group as they won all their games against Costa Rica, Spain and South Korea without conceding a goal.

“We don’t have a lot of be sorry about, just sorry we lost,” said coach Vadao.

“Australia were very competitive in the more critical moments. They were very efficient.

“The game was very balanced in the first half but we were in control in the second half. It was one detail, one ball that we lost in midfield.”

In Sunday’s other last 16 games, third-ranked France play South Korea in Montreal with hosts Canada are up against Switzerland in Vancouver.