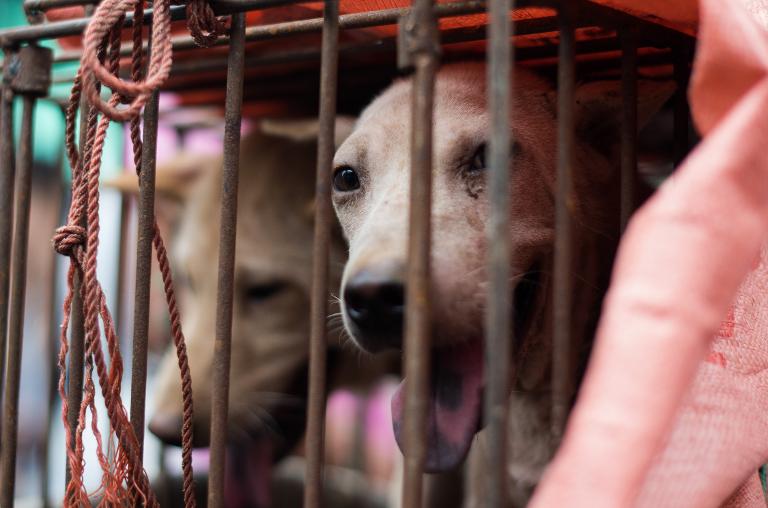 Campaigners protesting at China’s annual dog meat festival, which sees thousands of canines butchered and eaten, were forcibly dispersed by unidentified men Monday as they tried to rally outside a government office.

About 10 animal rights activists unfurled banners outside the Yulin government headquarters before a group of 20 men came and chased them off, according to an AFP photographer at the scene.

The city in the southeastern region of Guangxi holds an annual festival on the summer solstice devoted to the consumption of dog meat, in defiance of an increasing backlash from animal rights activists.

The campaigners held signs reading “Crack Down on Illegal Dog Meat Trade” and “Punish Illegal Dog Transport”, but the banners were quickly torn out of their hands by the unidentified group.

The slogans are an attempt to appeal to local government officials to enforce existing laws on health and administrative grounds, since there are no rules banning the consumption of dog meat.

“Many of these animals are stolen pets, and most of the dog meat trucks coming in are in total breach of Chinaâ€™s very clear laws on animals for human consumption,” Adam Parascandola, director of animal cruelty issues at the Washington DC-based Humane Society, said in a statement.

“How much longer can China simply allow the Yulin authorities to flout the law like this?”

As many as 10 million dogs are killed for food annually in China, with up to 10,000 killed for the Yulin festival, according to the Humane Society.

Shortly after the protest in another part of Yulin, traders openly sold dogs off the back of scooters as hundreds gathered at a market. Many dogs were kept in tightly packed cages.

– Saved from the cooking pot –

Activists, who say the festival is cruel, have in the past travelled to the city to hold demonstrations, sometimes buying dogs to save them from the cooking pots.

This year the festival has also been targeted by British comedian Ricky Gervais, who posted a series of messages on Twitter with the hashtag “StopYuLin2015”, writing on Sunday: “It should be called a Dog Torture Festival. Because that’s what it is.”

But many comments on Sina Weibo, a Chinese Twitter equivalent, had no problem with the concept of eating dog.

“Of course it’s alright to eat dog, just don’t steal other peoples pets and eat them,” wrote one commentator.

The city’s government has tried to distance itself from the event.

“Some residents of Yulin have the habit of coming together to eat lychees and dog meat during the summer solstice,” its news office wrote on Sina Weibo.

Around 30 million households in the country are estimated to keep dogs as pets, helping to fuel the growing local animal rights movement.

A petition on Change.org calling for the end to the festival — illustrated with a photo of a dog weeping tears of blood in front of a Chinese flag — had garnered more than 3.8 million signatures by Monday afternoon.