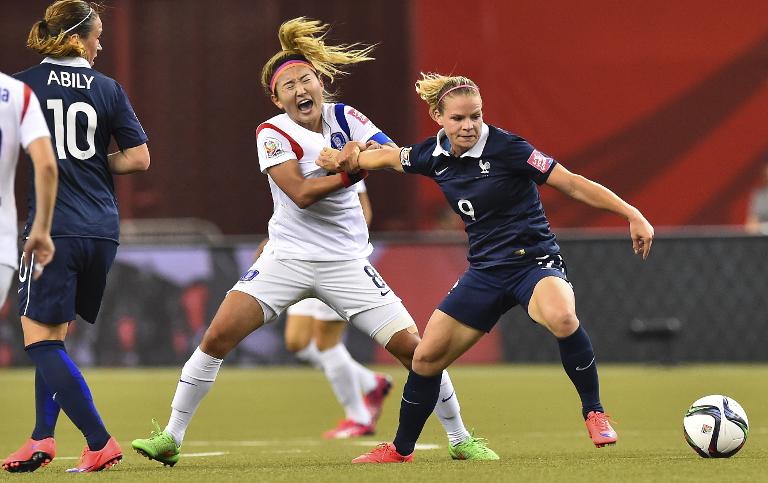 Marie-Laure Delie and Elodie Thomis both scored as France overpowered South Korea 3-0 to advance to a quarter-final clash with top-ranked Germany at the Women’s World Cup.

Delie grabbed a brace with Thomis also on target in a dominant display from ‘Les Bleues’ at Montreal’s Olympic Stadium to put France through to a last-eight meeting with the world number one team.

The French followed on from their 5-0 rout of Mexico in their final group match, where they also scored early in bouncing back from their shock 2-0 defeat to Colombia.

“The players have a lot of determination as soon as the anthem plays,” said coach Philippe Bergeroo.

“We’ve done a lot of tactical work to try to muscle the opponents and it worked twice, it didn’t work against Colombia.

“By scoring early it allows us to relax and then be able to go after the opposing team.”

The Koreans were hit by the absence of star striker Ji So-Yun after the Chelsea LFC player suffered a thigh injury against Spain.

“It was a bit too much for her,” said coach Yoon Deok-Yeo.

“We could have been ambitious, but the player’s future is more important, so I decided not to start her.

“She was very upset but she complied with our decision.”

The 18th-ranked Koreans were no match for the third-ranked European side and only managed to venture forward on rare occasions with just three shots on goal.

Delie and Le Sommer both had chances to increase France’s lead before the break, but Kim Jung-Mi proved solid in Korea’s goal.

But minutes after the restart, Le Sommer beat three defenders on a superb run down the left side of the penalty area, passing the ball back to Delie to score.

“This French team are very impressive,” said Yoon, whose side were competing in just their second World Cup and first since 2003.

“They have a lot of quality and will go far in this tournament. The match didn’t go according to plan.

“We conceded three early goals and went away from our game plan. Our defence was not able to resist.”

France qualified top of Group F after wins over England and Mexico.

But Bergeroo admitted it took the players a while to digest their shock loss to Colombia.

“After Colombia my role was to protect my team and when times are difficult you need to tell them ‘I have confidence in you’ and if there is someone to take blame for defeat I will take it as the coach. It takes the responsibility off them.”

South Korea emerged second from Group E behind Brazil, who were stunned 1-0 by Australia in their last 16 game in Moncton earlier Sunday.

Midfielder Camille Abily said they were looking forward to measuring themselves against Germany — winners in 2003 and 2007 — who demolished Sweden 4-1 in their last 16 game on Saturday.

“Germany are among the favourites. We’re getting stronger and we’re going to give everything. We’re not afraid of them,” warned Abily.

It is just the third time France are playing in the World Cup — they finished fourth in Germany in 2011.