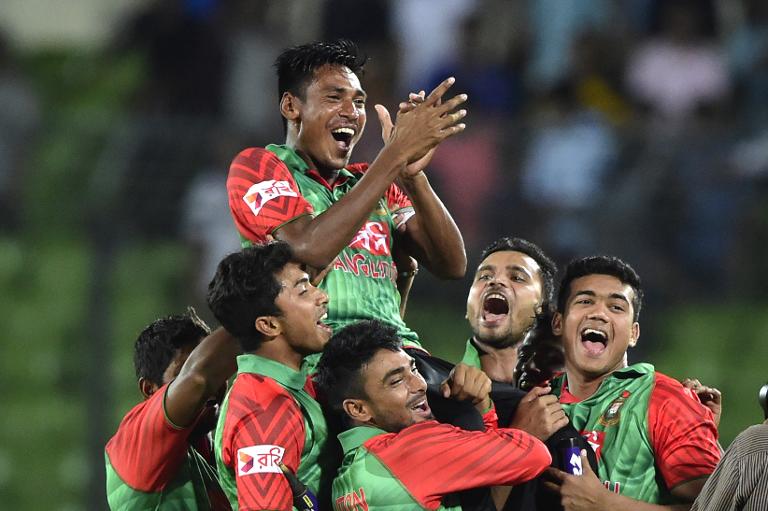 Left-arm pacer Mustafizur Rahman tore through the Indian batting order once again to help Bangladesh seal the three-match one-day international series with a thumping six-wicket win in Dhaka on Sunday.

Mustafizur picked up where he left off in the opening match, when he claimed 5-50, to grab 6-43 and help bowl India out for 200 runs, a target Bangladesh reached in just 38 overs.

The hosts were given a target of 200 runs in 47 overs based on the Duckworth/Lewis method after rain interrupted play for more than an hour towards the end of India’s innings.

Sabbir Rahman (22 not out) steered Axar Patel to third man for the winning run with Shakib unbeaten on 51 at the other end, having smashed five fours in a 62-ball innings.

The win, which followed Thursday’s 79-run success, all but confirmed Bangladesh’s place in the 2017 ICC Champions Trophy in England after they cemented the seventh position in the ODI rankings.

Hosts England, plus seven top-ranked one-day sides will progress to the tournament.

“To be playing in the Champions Trophy is a big achievement for us,” said Bangladesh captain Mashrafe Mortaza.

“Every time we were shaken someone took over. That is a big thing. The way (Mustafizur) is bowling he has become the big fish.

“It has been very significant, and many series (are) coming up, hopefully we can keep on performing like this.”

Earlier in the day, Shikhar Dhawan scored 53 runs while skipper Mahendra Singh Dhoni chipped in with 47 as India toiled against some fine Bangladesh bowling in a bid to stay alive in the series.

Electing to bat first after Dhoni won the toss, India suffered its first blow on just the second ball when Rohit Sharma was caught at cover by Sabbir Rahman off Mustafizur.

Nasir, who claimed 2-33, trapped Kohli leg before for 23 and then had Dhawan caught behind soon after the opener completed his fifty.

Ambati Rayudu, one of the three changes India made for the game, followed Dhawan without scoring to leave the visitors struggling at 4-110.

Dhoni, who promoted himself at number four, put on a 53-run partnership in the fifth wicket with Suresh Raina, but Mustafizur returned in his second spell to dismiss Raina for 34 to break the stand.

Dhoni, dropped by wicketkeeper Das on 21, later succumbed to the pressure, spooning a catch off Mustafizur to Nasir at short cover.

Mustafizur created a chance of a hat-trick, trapping Axar Patel leg before off the next ball.

While Ravichandran Ashwin survived the hat-trick ball, he soon became Mustafizur’s fifth victim, edging a catch behind the stumps.

Mustafizur bowled Jadeja off his final delivery after the rain break and Rubel ended India’s innings two balls later to finish with 2-26.

“It’s pretty simple to see what went wrong,” Dhoni said after the match. “We need to put runs on the board.

“We didn’t get to a good start, and whenever there was a partnership we lost two wickets together.

“You have to take risks in such a game, but if you keep losing two wickets in a row, it becomes difficult to do so.”

The third and final ODI will be held at same venue on June 24.