Johnson moves to the front at US Open | Newsmobile
Thursday, August 18, 2022

Home Sports Johnson moves to the front at US Open 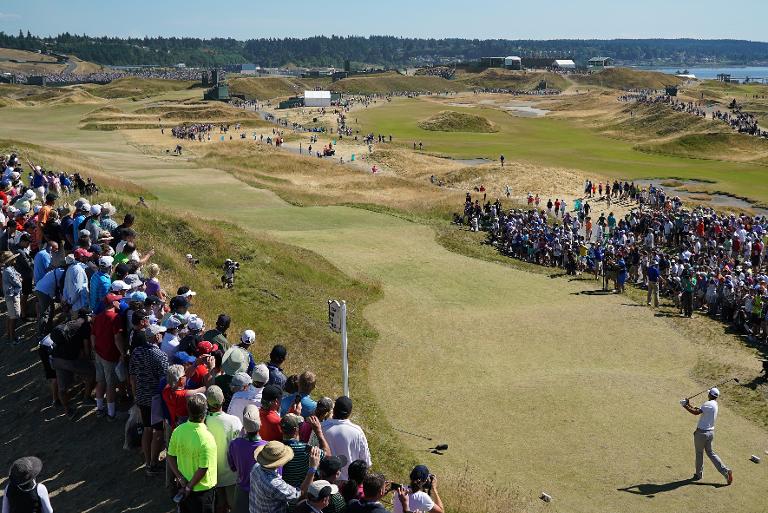 Johnson is part of the four man co-leader mix that also included Masters winner Jordan Spieth and two-time US Open runner-up Jason Day who has been battling vertigo throughout the final three rounds.

For the first time since 1973, four players headed into the final round with a share of the lead, comprising Spieth, Jason Day, Dustin Johnson and Branden Grace.

Johnson, of the United States, began his final round with three straight pars before making birdie on the par-four 4th to take a two shot lead.

The long hitting Johnson is trying to conquer the Chambers Bay course and claim his first major championship as many believe he is long overdue having come close in all four Grand Slam tournaments in the past.

Spieth was the first to blink on Sunday as the young American rolled his birdie attempt three feet past the hole then saw his second putt go wide left on No. 1. But he got it back with a birdie on eight to make the turn at even-par 35.

Spieth, who won his first major at Augusta in April, Johnson and Grace have all won at some stage this year.

So has Day, who battled nausea, dizzy spells and the shakes associated with his vertigo attacks, to shoot a third round 68 and join the pace-setting quartet at the top of the leaderboard.

Much criticised over the week by many players for its fiery fairways and bumpy greens, the links-type Chambers Bay course was again set to be a monster challenge at 7,384 yards.

Conditions though were perfect as they had been throughout the week.

The biggest mover of the day was world number one Rory McIlroy, who shot a four-under 66.

McIlroy, who has won two of the last three majors, started the day eight shots off the pace and at one point on the back nine got to within two of the leader.

“I played on the great front nine,” McIlroy said. “Instead of making two birdies on way in I made two bogeys which was disappointing.”

MacIlroy put a scare into the leaders with a run of five birdies through seven holes around the turn but then petered out with two bogeys in the final four holes to finish at even-par 280.

Day instantly became the crowd favourite after a frightening vertigo attack near the end of his second round that caused him to go down in front of the ninth hole grandstand.

He was still suffering in the final round, but soldiered on to make the turn at one over 36 after two birdies and three bogeys.

Spieth, the 21-year old Texan who is seen as the new face of American golf, replacing the fast-fading Tiger Woods, is seeking to do something only five other players have done – winning the Masters and the US Open in the same year, thus getting halfway to pulling off an unprecedented calendar-year Grand Slam.

Johnson is the biggest hitter on the PGA Tour and this year appears to have added a finesse around the greens to his game and a maturity to his approach.

The wildcard among the leading foursome will be 27-year-old Grace of South Africa.

But he is a proven front-runner having won on each of the six occasions he has been leading or sharing the lead after 54 holes.

Grace is seeking to become the third South African to win the US Open title after Gary Player, Ernie Els and Retief Goosen.