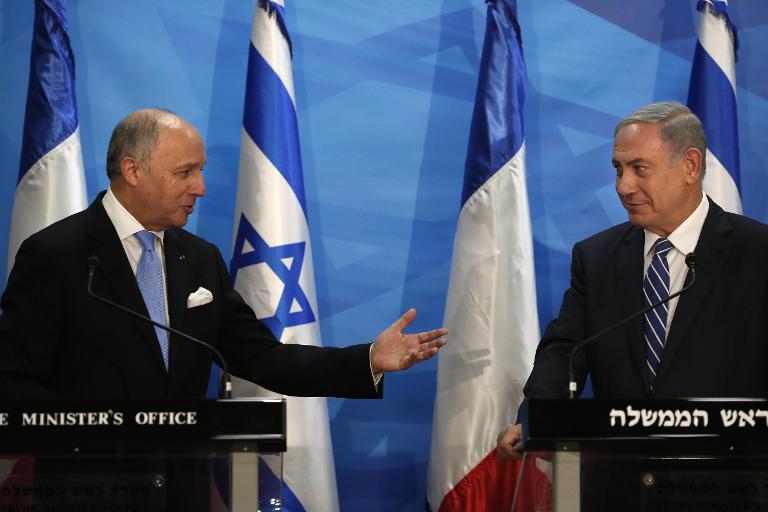 With negotiations between Israel and the Palestinians stalled for more than a year, French Foreign Minister Laurent Fabius met Palestinian president Mahmud Abbas and Netanyahu on Sunday.

The separate meetings in Ramallah and Jerusalem were part of a regional tour by Fabius aimed at reviving peace talks.

France has argued in favour of a UN resolution that would guide negotiations leading to an independent Palestinian state and which could include a timeframe for talks.

Ahead of Fabius’s arrival in Jerusalem, Netanyahu hit out at international diplomatic efforts to impose proposals which he said neglected to address vital Israeli security concerns, saying his government would reject “international dictates”.

In a joint news conference with Fabius after their meeting, Netanyahu said “peace will only come from direct negotiations between the parties without preconditions”.

“It will not come from UN resolutions that are sought to be imposed from the outside,” he said.

Netanyahu said a Palestinian recognition of the Jewish state as well as “iron-clad security arrangements on the ground in which Israel can defend itself” were requirements for peace.

Fabius sought to respond to such concerns, saying negotiations would ultimately be left to the Israelis and Palestinians, but that it did not prevent international support in the process.

“We must both guarantee Israel’s security and at the same time give Palestinians the right to have a state,” Fabius told journalists earlier at a joint news conference with Palestinian foreign minister Riyad al-Malki in Ramallah.

Malki welcomed France’s efforts, but said he doubted a deal was possible with the current rightwing Israeli government, which he labelled “extremist”.

Fabius sought to ease some Israeli concerns with the announcement that Abbas — who is attempting to form a new cabinet after the government collapsed this week amid a deepening rift with Hamas — had vowed any new Palestinian unity government should not include the Islamist group.

“(Abbas) told me this government of national unity could only include women and men who recognise Israel, renounce violence and who are in agreement with the principles of the (Mideast) Quartet,” Fabius said at a press conference in Jerusalem after holding talks with Abbas in Ramallah.

Noting that those conditions ruled out Hamas, the de facto rulers of the Gaza strip, Fabius added: “And that suits us perfectly.”

In Cairo on Saturday, Fabius had warned that continued Israeli settlement building on land the Palestinians want for a future state would damage chances of a final deal.

Peace talks between Israel and the Palestinians have been comatose since a major US push for a final deal ended in failure in April 2014.

Israel says the process failed because the Palestinians refused to accept a US framework document outlining the way forward.

But the Palestinians blame the collapse on Israel’s settlement building and the government’s refusal to release veteran prisoners.

The relationship between the two sides remains severely strained, prompting the Palestinians to boost efforts on the international stage to seek their promised state.

Such efforts have included a push to open criminal proceedings against Israel before the International Criminal Court.

Tensions have been high, and on Sunday a Palestinian stabbed and seriously wounded an Israeli border policeman outside Jerusalem’s Old City, with the officer managing to shoot his attacker, leaving him in critical condition.

It was the latest in a string of so-called lone-wolf attacks by Palestinians.

The United States has consistently defended Israel before the UN Security Council, and any French resolution must be accepted by Washington to avoid a veto.

President Barack Obama’s administration, however, has signalled that it could be swayed given Netanyahu’s recent comments regarding a Palestinian state.

Netanyahu sparked international concern when he ruled out the establishment of a Palestinian state while campaigning for the March 17 general election, though he later backtracked.

France could unilaterally recognise a Palestinian state should the peace process remain moribund, a possibility that could pile further pressure on Israel.

France’s diplomatic efforts come against the backdrop of negotiations with Iran over its nuclear programme, with Israel firmly opposing the deal currently on the table.