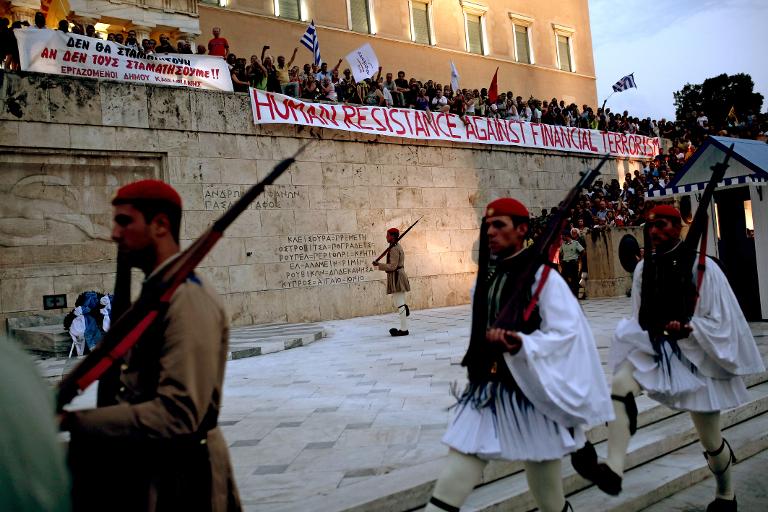 Greece’s new proposals to European leaders ahead of a crunch summit Monday offered a ray of hope that a deal to end the country’s debt crisis can be struck after five months of deadlock.

It is not clear what concessions have been offered by either side, but Greek premier Alexis Tsipras detailed what his office called a “mutually beneficial deal” in a phone call with German Chancellor Angela Merkel, French President Francois Hollande and European Commission President Jean-Claude Juncker.

Juncker’s cabinet head Martin Selmayr said the Athens proposal offered “a good basis for progress”, though he described the negotiations as a “forceps delivery”, underscoring the exertions to prevent Greece crashing out of the eurozone.

The heads of the 19 eurozone countries will hold an emergency summit on the crisis in Brussels later Monday under pressure to prevent Greece from defaulting on its debt, with a June 30 payment deadline approaching.

Greece said its new proposals were aimed at reaching a “definitive solution” to end the standoff between Athens and its creditors.

Athens announced a frenzied round of meetings before the summit, with Tsipras also scheduled to meet the leaders of its International Monetary Fund, European Union and European Central Bank creditors on Monday.

Separately, the ECB’s governing council will also meet on Monday to discuss whether to raise the level of emergency funding to Greek banks yet again, after the country’s banking system came under intense pressure with clients withdrawing massive sums in savings.

Failing a deal, Greece is likely to default on an IMF debt payment of around 1.5 billion euros ($1.7 billion) due on June 30, setting up a potentially chaotic “Grexit” from the eurozone.

Italian Prime Minister Matteo Renzi urged the two sides to seize a “window of opportunity”, saying all conditions were in place for them to reach a “win-win accord”.

Asian markets mostly reacted positively in morning trade, with Tokyo piling on 0.80 percent and Hong Kong up 0.44 percent by the break.

“Originally there wasn’t going to be one, so the fact that there’s a new proposal on the table appears to be seen favourably,” Shoji Hirakawa, chief equity strategist at Okasan Securities Co. in Tokyo told Bloomberg News.

Underlining the growing concern beyond Greece, several thousand demonstrators gathered in Brussels on Sunday and several hundred in Amsterdam to plead for solidarity with the cash-strapped country.

In Athens itself, more than 7,000 people took to the streets for the second time this week to protest austerity with banners reading “A different Europe with Tsipras” and “You can’t blackmail the people, the country is not for sale”.

The head of Greece’s biggest bank said she thought “sanity will prevail” and lead both sides to a deal.

“To enter into such uncharted waters and take up all the risk both for the eurozone and for Greece for two or three billion (euros) difference, I think it’s insane,” National Bank of Greece chief Louka Katseli told BBC radio.

The EU’s involvement in the huge bailout, which was to provide 240 billion euros ($270 billion) in loans in exchange for drastic austerity measures and reforms, runs out at the end of this month, but IMF support was supposed to continue to March 2016.

Discussions between Greece’s radical-left government and its lenders have been stalled by disagreements over the reforms demanded in exchange for the final 7.2 billion euro tranche of the bailout, with talk also turning to an extension of the European help.

For the Greek government, any extension of the bailout should be about kickstarting the country’s devastated economy and not imposing further austerity.

They also want an easing of the country’s crippling debt burden, which officially stood at 312.7 billion euros, or 174.7 percent of gross domestic product, in March.

The international lenders have rejected a series of proposals from Athens, insisting on their own mixture of cuts and reforms.

Alekos Flambouraris, another Tsipras minister, said Saturday that Athens would propose reworked measures that “bridge the gap”, while also predicting that Greece’s creditors would not be satisfied with the gestures, Greek media reported.

Shinya Harui, a Europe-focussed financial markets analyst at Nomura Securities in Tokyo said that despite the optimism displayed by financial markets, it was difficult to forecast the summit outcome.

“(Greece) is unlikely to have presented clean-cut proposals that meet creditors’ demands but they are likely to claim they have made enough concessions, and it is creditors who are blocking a deal,” he told AFP.

“They are probably still trying to negotiate at their own pace.”