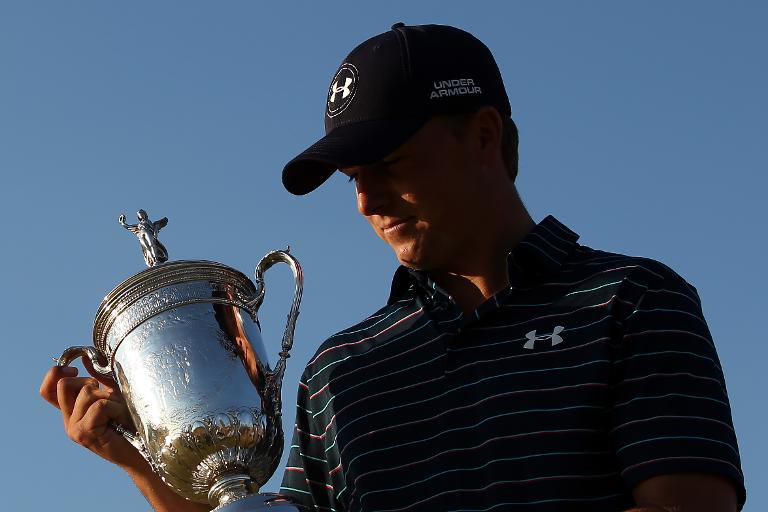 Two down and two to go – and Jordan Spieth believes that an unprecedented clean sweep of golf’s four majors in the same year is possible.

The greats of the game – Ben Hogan, Arnold Palmer, Jack Nicklaus, Gary Player and Tiger Woods – have all tried and all have failed to achieve that feat.

Spieth though has now put himself in that Grand Slam position by winning the US Open in thrilling style at Chambers Bay on Sunday two months after lifting his first major at the Masters.

It’s a mouthwatering prospect which will take him to St. Andrews for the British Open next month and to Whistling Straits in Wisconsin for the PGA Championship in August.

It’s a prospect that 21-year-old Spieth has clearly considered, but he does not want to get too far ahead of himself.

“I think it’s in the realm of possibility,” he said shortly after his US Open win.

“I’m just focused on the Claret Jug (British Open) now. I think that the Grand Slam is something that I never could really fathom somebody doing, considering I watched Tiger win when he was winning whatever percentage of the majors he played in and he won the Tiger Slam, but he never won the four in one year.

“And I figured if anybody was going to do it, it would be him, which he still can.

“I think we’ll just use that secret formula and see if we can maybe have it on these next two weeks — the two weeks that the majors are held.

“And I’m just excited for the opportunity coming then, and I’m not going to think about what could possibly happen after.”

All the talk is of a rivalry between the two young guns that will light up golf for the forseeable future, although Spieth says he does not yet consider himself to be in the same elevated bracket as the Northern Irishman.

“It’s kind of cool. I think to have two players holding the four majors and Rickie (Fowler) having the fifth (Players Championship). It’s awesome that the game is in young hands.

“I don’t think there is much of a rivalry. I’ve said that from the beginning. Rory has four majors and dozens of wins and I’m just starting out.

“Again, I’m certainly quite a bit younger than he is. I’m just happy to have this and to be chasing that number one spot that he holds. So I’m certainly focused on that.”

First up for Spieth will be his preparations for St. Andrews, a course he has played only once before, but which, like many of his peers, he holds in great reverence.

“The home of golf. I’ve played one round on St. Andrews, and it was when we were playing in the Walker Cup at Royal Aberdeen and we went as a team to visit St. Andrews first.

“I remember walking around the clubhouse. It’s one of my favourite places in the world.

“I remember walking around The R&A clubhouse and seeing paintings of royalty playing golf, and it was dated 14-whatever, 1460-something.

“I’m thinking, our country was discovered in 1492 and they were playing golf here before anyone even knew that the Americas existed.”