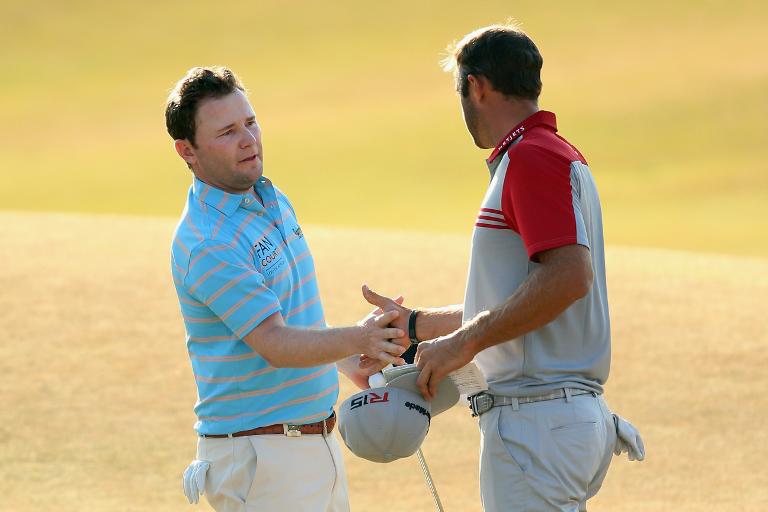 The lead pack was set to tee off Sunday in the final round of the US Open, an impressive mix that includes one player on the high of a breakout season and another battling vertigo.

For the first time since 1973, four players head into the final round with a share of the lead, comprising Masters champion Jordan Spieth, Jason Day, Dustin Johnson and Branden Grace.

Spieth, who won his first major at Augusta in April, Johnson and Grace have all won at some stage this year.

So has Day, who battled nausea, dizzy spells and the shakes associated with his vertigo attacks, to shoot a third round 68 and join the pace-setting quartet at four-under par 206.

They are three shots clear of the rest of the field and the odds are firmly that one of them will get the job done at demanding Chambers Bay golf course, 50 kilometres (31 miles) south of Seattle.

Much criticised over the week by many players for its fiery fairways and bumpy greens, the links-type lay out was again set to be a monster challenge.

Conditions though were perfect as they had been throughout the week.

The potential storylines are strong and none more so than for Day, who collapsed at the end of Friday’s second round with a vertigo attack, but, still suffering, came out to put together one of the most remarkable rounds in US Open history on Saturday.

At times he struggled to stay on his feet, looked distressed throughout, and even had difficulty glancing up to follow his ball flight.

But somehow he kept his game together as others around him came to grief on a golf course that takes no prisoners. Day on the contrary picked up shots.

“I didn’t feel that great coming out early, and then I felt pretty groggy on the front nine just from the drugs that I had in my system, then kind of flushed that out on the back nine,” the 27-year-old Queenslander said.

Spieth, the 21-year old Texan who is seen as the new face of American golf, replacing the fast-fading Tiger Woods, is on the cusp of doing something only five other players have done – winning the Masters and the US Open in the same year, thus getting halfway to pulling off an unprecedented calendar-year Grand Slam.

Age, however, he believes, does not come in to play.

“I don’t think of age as having anything to do with it,” he said.

“There’s four of us tied for the lead. There’s a lot of guys that can play a good, solid round from tomorrow and shoot two or three under and come from behind.”

Johnson many believe is long overdue for a major win having come close in all four Grand Slam tournaments in the past.

He is the biggest hitter on the PGA Tour and this year appears to have added a finesse around the greens to his game and a maturity to his approach.

The outsider among the leading foursome will be 27-year-old Grace.

But he is a proven front-runner having won on each of the six occasions he has been leading or sharing the lead afer 54 holes.

Grace is seeking to become the third South African to win the US Open title after Gary Player, Ernie Els and Retief Goosen.

Phil Mickelson closed with a roller-coaster round of three-over 73 that included four birdies, five bogeys and one double bogey which came on his last hole of the day.

Rory McIlroy, who won the 2011 US Open at age 22, got his final round off to a steady start with a par followed by a birdie on the par-four 412 yard second hole.

McIlroy began his final round eight strokes adrift of the leaders, giving him a mountain to climb just to get into contention.