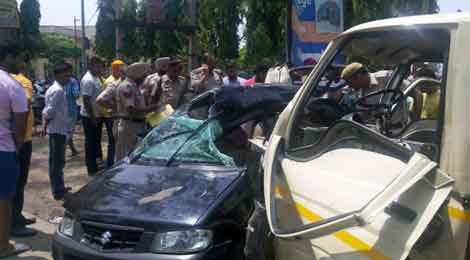 The incident occurred when the car in which 47-year-old Bala was travelling with her son, daughter and a driver, collided head on with another vehicle coming from an opposite direction, police said.

The other two deceased persons were identified as Bala’s son Agrim (14) and car driver Attar Singh (35), they said.

Bala’s daughter Varnika (20) was too critically injured in the accident and was rushed to a local hospital, they said.

Shashi Bala was a former Indian hockey team skiiper for women and was presently posted as hockey coach for RCF Kapurthala.

Shashi Bala along with her son and daughter were going from Kapurthala to Chandigarh.

The mishap took place when their car collided with a light commercial vehicle coming from an opposite direction near Kahma village here, Nawanshahr SP (D) Gagan Ajit Singh said.

Singh, who is also a former hockey player, said Shashi Bala had remained captain for Indian hockey team for women.

In the accident nine persons, who were in another vehicle, also sustained injuries and they were rushed to local hospital for treatment, police said.