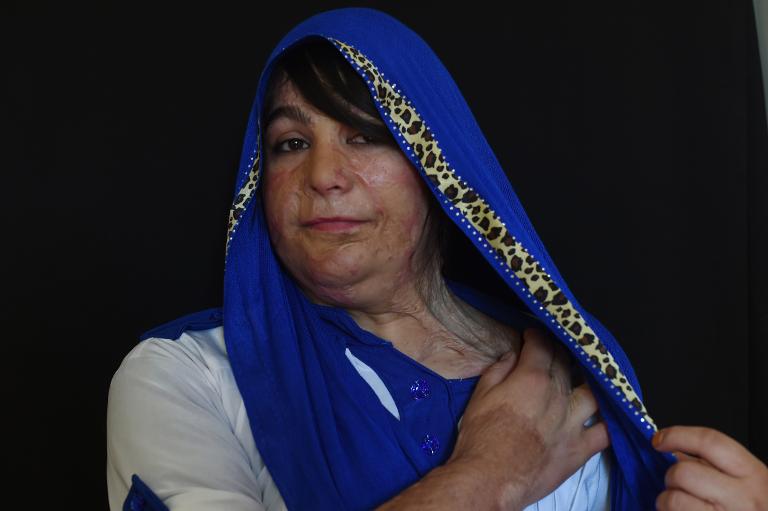 Four years after a militiaman doused Mumtaz with a flesh-searing acid for rejecting his marriage proposal, leaving her disfigured, scarred and traumatised, death threats have forced the 20-year-old Afghan into hiding.

Her ordeal encapsulates the major issues roiling Afghanistan — a silent tsunami of violence against women, anti-Taliban militias bringing further turmoil to an already conflict-torn country and a seemingly dysfunctional state unable to offer Afghans even a modicum of security.

Swaddled in a cobalt blue scarf partly covering her jagged facial scars, Mumtaz vividly recalls the horrors of that night when the jilted lover stormed into her house with six other assailants, holding up the corrosive liquid.

“He grabbed me by my hair and hurled the acid at my face with such vengeance, as if to say ‘now let’s see who will marry you’,” Mumtaz, who goes by one name, told AFP in a safe house in the volatile northern province of Kunduz.

She remembers screaming and writhing as the acid, some of which splattered on her sisters and mother, burned through her flesh.

Mumtaz has undergone multiple surgeries and painful skin grafts since the attack in 2011 — and is now forced to live in hiding due to threats purportedly from the assailants, some of whom are still at large.

Her plight is worsened by an escalating conflict in Kunduz, where the Taliban recently launched a large-scale offensive, creeping ever closer to the provincial capital and trapping civilians between insurgents and a miscellany of pro-government forces and militias.

Statistics are scant but acid attacks are common in Afghanistan, often used to deface and cripple women even for minor transgressions such as refusing to wear a head scarf or rebuffing unsolicited lovers.

When she was 14, Mumtaz, known within her extended family for her doe eyes and flawless skin, hid herself behind the folds of a burqa to evade the amorous advances of a militiaman called Nasir.

The daughter of a wheat farmer stopped going out unchaperoned and avoided the main village thoroughfares.

But Nasir, who gained local infamy for his links to an anti-Taliban militia, stubbornly lingered outside her house and waylaid her even as her family in a heated exchange warned him to back down.

Two years later, when Mumtaz got engaged to another man, he burst into her house to avenge the humiliation of rejection by wrecking her beauty.

He escaped after the horrific attack but a court sentenced three of his accomplices to a decade in prison, a rare judgement in a nation that offers female victims little legal recourse.

Ironically, though, Mumtaz’s real troubles began when they were put behind bars.

“They threatened to behead me. ‘We will kill your whole family when we get out of prison’, they said. ‘We will come after you’,” Mumtaz said.

Armed intruders have attempted to break into her house, said Women for Afghan Women (WAW), a nongovernmental organisation which helped Mumtaz with legal aid and seeking treatment for acid burns in India.

“We are very concerned about her safety,” Haseena Sarwari, the Kunduz manager for WAW, told AFP.

“The men in Mumtaz’s household are forced to carry firearms and take turns to sleep at night,” she said, clarifying that the motive of those intruders was not always clear as cracks of mock gunfire from inside were enough to deter them.

Mumtaz’s father, Sultan, said the attempted intrusions forced them to move houses but going to his farm was fraught with risks.

Relatives of the jailed assailants have chased him down by motorcycle, threatening him with consequences if they did not get out of prison soon.

“They will never leave us alone,” Sultan said with a lump in his throat.

The attack on his daughter makes him writhe with fury but also shudder with fear.

“We are barely living, confined to our home, stripped of our livelihood,” he said. “It’s a helpless feeling.”

AFP could not access the families of the assailants, residing in an outlying village of Kunduz city that has seen regular skirmishes between insurgents and militias.

In recent years Afghanistan has seen a rise of militias, former mujahideen strongmen both feeding off and fuelling the conflict, and accused of a litany of abuses including rape and forcibly collecting “protection tax” from civilians.

When he came to power last year President Ashraf Ghani vowed to disarm the militias, blamed for devastating Afghanistan during the country’s civil war in the 1990s and setting the stage for a Taliban takeover.

But as the Taliban insurgency spreads north from its southern stronghold, the government appears to be remobilising them to augment Afghan security forces.

“The predatory behaviour of these militias, and abuses that include extrajudicial killings, beatings, and looting, have left civilians trapped between them and the Taliban and has bolstered some support for the insurgents,” Patricia Gossman of Human Rights Watch said in a recent statement.

“But the Afghan government is again reactivating militias that threaten the lives of ordinary Afghans. If there is to be any hope of a long-term security in Kunduz -â€“ and across Afghanistan -â€“ this reliance on abusive militias has to end.”

Earlier this year Mumtaz married the man she was engaged to, bringing a faint glimmer of hope in her life.

“But I live in constant fear that they (the assailants) will find me one day.”