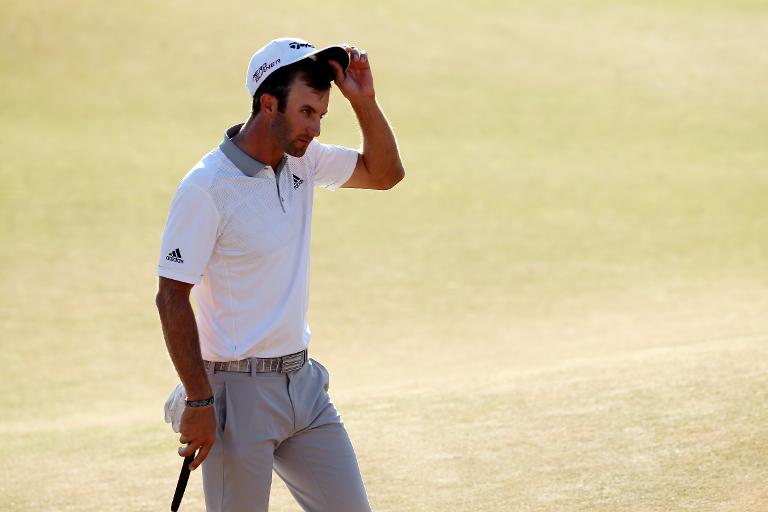 Dustin Johnson suffered another heavy dose of heartache Sunday after he was denied his first major championship victory when he missed two putts on the final hole of the 115th US Open.

The 30-year-old Johnson three-putted on the last hole of the final round at Chambers Bay, spoiling his chances of getting into an 18-hole potential Monday playoff with Jordan Spieth.

The long-hitting Johnson, who many believe is overdue a major title, fired an even-par 70 to finish at four-under 276, one stroke behind fellow American and now two-time major winner Spieth. He finished in a tie for second with South African Louis Oosthuizen.

“Disappointed. I played really well I just didn’t make any putts today,” said Johnson, who is ranked seventh in the world. “I did everything I could. I tried my damndest to get in the hole. I just couldn’t do it.”

Playing in the final pairing, Johnson reached the par-five 18 green in two and had a 12-foot eagle putt to take his first major title.

He missed his eagle and then had a four-foot putt to force an 18-hole playoff on Monday but missed that one as well.

Johnson’s short putt didn’t break how he’d hoped as it ran just wide of the hole.

“Whatever the putt did on the last hole, I don’t know. I might have pulled it a little bit. But still to me it looked like it bounced left. It is tough. It’s very difficult.”

Johnson tried to put a brave face on a frustrating end to his round.

“I am disappointed that I three putted the last hole. Other than that it was a damn good week.”

Johnson led the 2010 US Open at Pebble Beach through 54 holes before finishing eighth.

Johnson’s final round frustrations at Chambers Bay brought back memories of another Sunday snafu over four years ago at a similar links-style PGA Championship in Whistling Straits when he missed a spot in a playoff and a possible major crown.

Officials ruled Johnson illegally grounded his club in what was deemed to be a bunker before his second shot leading to a two-stroke penalty. That wiped out any chance he had of joining Martin Kaymer and Bubba Watson in the potential playoff.

Johnson has been playing well since taking a six month break last year to work through some personal issues.

Golf Magazine reported at the time that Johnson had been suspended from the PGA Tour for six months after testing positive for cocaine, which the PGA Tour denied, saying it was a voluntary leave.

Johnson returned in good shape, winning the World Golf Championship event in Florida in March. He had has seven top-10 finishes in majors and was tied for fourth at last year’s US Open.

He was hoping to wash away some of the disappointment Sunday by spending the rest of Father’s Day with his infant son.

He and his partner Pauline Gretzky — the oldest daughter of Canadian hockey legend Wayne Gretzky — had a son in January.

“My trophy at the end of the day is holding my little man,” he said. “I couldn’t be more proud of myself and my family. Now matter what I am going to keep my head high.”