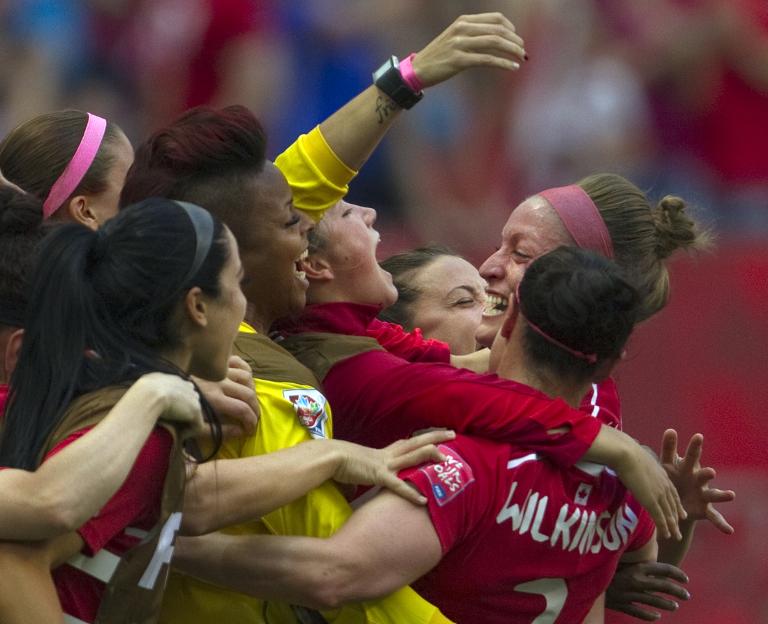 Canada kept their Women’s World Cup title dream alive with a 1-0 win over Switzerland to reach the last eight along with France and Australia as star-studded Brazil were toppled.

A Josee Belanger second-half goal was enough to secure the hosts a quarter-final spot at the expense of newcomers Switzerland.

The 29-year-old from Quebec scored the winner after 52 minutes to the delight of a passionate home crowd of 53,855 at Vancouver’s BC Place Stadium.

“Walking out onto the pitch with 50,000-plus people, who would have thought it for women’s football?” said coach John Herdman.

“It was one of those surreal things for staff and players.”

Olympic bronze medallists Canada next play either England or Norway in BC Place Stadium for a place in the semi-final.

But Englishman Herdman said he didn’t have a preference.

“I’m a Geordie first and foremost, we have our own Geordie nation in the north east of England, and Canadian second, this is my country this is my place, I’d love to see England or Norway it makes no difference.”

In Moncton, Kyah Simon’s second half winner sent the Brazil of former five-time world player of the year Marta packing 1-0.

The Matildas next meet either defending champions Japan or the Netherlands.

In Montreal, Marie Laure Delie scored a brace and Elodie Thomis was also on target to put the third-ranked French through to a last-eight meeting with world number one side Germany.

Simon, 23, found the way through after 80 minutes of battle in wet and windy conditions in Moncton against the 2007 runners-up.

“I think exhilarating is the word for such a victory against a big, powerful football nation,” said coach Alen Stajcic of Australia’s first win in a knockout round at the World Cup.

“Being in the right place at the right time is what makes great players and Kyah Simon showed that today,” said Stajcic.

Australia must now travel 4,600km back across the country to Edmonton for the last eight as seventh-ranked Brazil return home still awaiting a maiden title.

Formiga, 37, had Brazil’s best chance of the first half — but her curling effort was tipped over by goalkeeper Lydia Williams.

But the game came to life around the hour mark.

Marta, 29, missed a chance to add to her World Cup record 15 goals when she fired wide, and a Formiga header bounced off Williams’ near post.

Stajcic brought on Sydney FC player Simon after 64 minutes and it paid off with ten minutes to go.

Captain Lisa De Vanna had her shot punched out by Luciana in the Brazil goal straight into the path of the onrushing Simon.

It is the third time that Australia have reached the quarter-finals after 2007 and 2011, but they had never won a knockout round match before.

The tournament has a last-16 round for the first time as it has been expanded to 24 teams.

France coach Philippe Bergeroo suggested his side had been even restrained in their scoring against outclassed 18th-ranked Asian opponents.

The second half was more of the same with Delie picking up a Eugenie Le Sommer cross on front of goal three minutes after the break.

“It’s a good result, we got off to a good start while respecting this Korean team,” he said.

“The girls made things easy for themselves. They had an extraordinary start to the game.”

In Monday’s action 1995 winners Norway are up against England in Ottawa, as Colombia take on the United States in Edmonton.