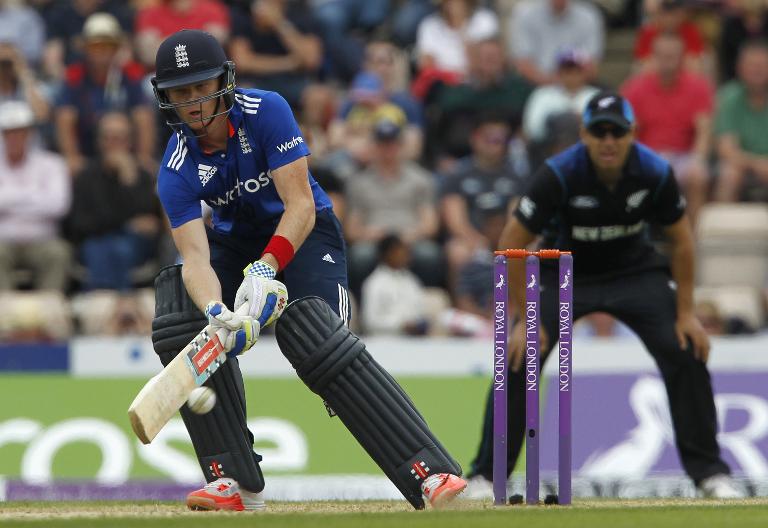 Manchester United fan Sam Billings will be looking to star for England against New Zealand at the ‘other’ Old Trafford on Tuesday after turning his back on a possible football career.

The 24-year-old Kent batsman made an important 41, the best innings of his fledgling England career so far, as the hosts beat New Zealand by three wickets at Chester-le-Street on Saturday to seal a 3-2 one-day international series win.

Now Billings is set to feature in Tuesday’s lone Twenty20 against the Black Caps, the final match of New Zealand’s tour, which takes place at Old Trafford — the headquarters of Lancashire which shares its name with the nearby Manchester United home ground.

As a schoolboy, Billings scored a hat-trick against the Tottenham Hotspur Academy side but turned down the offer of a trial with the London club because it clashed with a cricket tour.

“I dabbled in a bit of football back in the day,” Billings told reporters at Old Trafford on Monday.

“I’d like to say I played centre attacking midfield but that’s generous. I was up front, a show pony.

“I scored a hat-trick against Tottenham Academy and managed to get a trial, but I didn’t go because I was on tour in Barbados with South of England Under-14s.

“Cricket was always going to be the only sport I was going to play to a professional level. That was my first passion.”

Billings, like many cricketers, also enjoys golf but showed an aptitude for rackets, a sport he describes as “squash on speed” and one in which his cousin, Tom Billings, is ranked number three in the world.

However, cricket remains the priority for Billings and he has been delighted to be involved in a thrilling one-day series, which has inspired England fans disillusioned by the team’s miserable first-round exit at this year’s World Cup.

“It’s been a great advert for one-day cricket and a fantastic result,” he said.

“It has been a phenomenal experience and one that I will remember for the rest of my life,” added Billings.

“It is a childhood dream and it’s what you get up every day for. It has been fun, a great two weeks.

“It is a great start but it is only a start. We want to take this team further forward.

“Hopefully it has generated a bit of interest around the country and got people behind the England cricket team going into the Ashes, which can only be a good thing.”

Although Kent’s wicket-keeper, Billings has been played as a batsman only against New Zealand, even when Jos Buttler was injured ahead of Saturday’s match in Durham.

Instead, England opted for Jonny Bairstow with the Yorkshireman scoring 83 not out and sharing a stand of 80 with Billings after England slumped to 45 for five at the Riverside.

However, Billings had no problems in giving up the gloves.

“Initially at Kent we had Geraint Jones and we all know how good a keeper he was, so the only way I could get into the team was as a batsman alone,” he said.