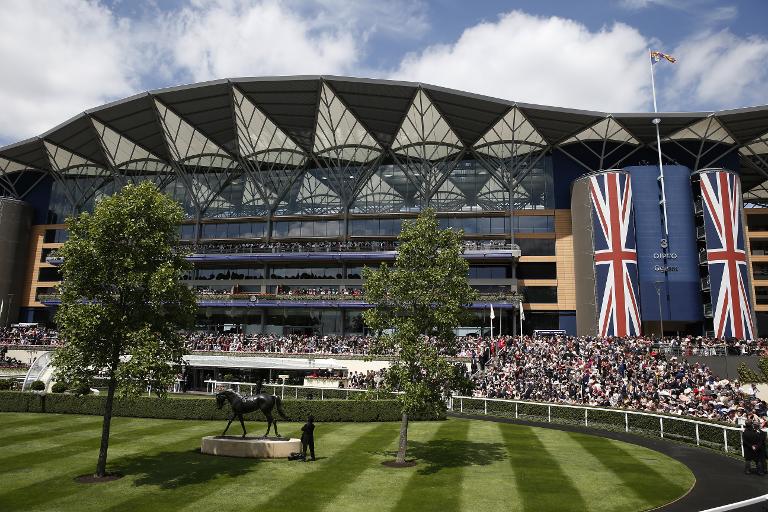 American trainer Wesley Ward lit up the final day of Royal Ascot when he saddled Undrafted to a pulsating victory in the feature race, the Â£525,000 Diamond Jubilee Stakes over 1200m.

Under a finely-judged ride from Frankie Dettori, Undrafted swooped late and fast to collar Brazen Beau, the Australian-trained favourite, in the dying strides.

The outcome marked a significant change of fortunes for the international challenge, which has largely underperformed throughout the week.

For Ward, however, it was a second winner after Acapulcoâ€™s triumph in the Queen Mary Stakes on Wednesday.

Ward was overcome with emotion afterwards. He spent the previous night in nearby Frimley Hospital after his daughter, Denae, became ill with Bell’s palsy.

But the pair were both on hand to witness what Ward described as â€œcertainly the biggest race I have ever won.â€

Hugging Denae, Ward said: â€œShe was very unwell but we are here today to enjoy this special moment. I canâ€™t tell you what this means.â€

â€œFrankieâ€™s got the touch,â€ Ward said. â€œHeâ€™s magical, and he showed that today.â€

It was Dettoriâ€™s third winner of a week in which his renaissance continued apace, and he returned Wardâ€™s compliments.

â€œFor Wesley to have two winners this week is just fantastic,â€ the jockey said.

â€œHeâ€™s a good friend and supporter of mine, so it gives me great pleasure to win this race for him.â€

Runner-up Brazen Beau was left isolated through the race when jockey Craig Williams chose to keep his mount away from the main pack.

He looked like winning until Dettori overhauled him in the dying strides.

â€œIt would have been an advantage if he was with another horse for some company,â€ Williams lamented afterwards.

â€œHe was idling a bit and we just didnâ€™t have that extra bit of punch at the end. He was very brave.â€

â€œWe had to do it the tough way all on our own,â€ he said, â€œbut full credit to Craig (Williams). He nearly pulled it off.â€

Earlier, Michael Stoute won the Hardwicke Stakes for the ninth time in his career -â€“ but not in the manner expected.

Stoute saddled three of the eight runners, among them last yearâ€™s winner Telescope, who started a warm favourite.

But Telescope faded quickly as stablemate Snow Sky, who made all the running under Pat Smullen, galloped to a resounding victory from Eagle Top and Postponed.

Victory brought welcome relief for Stoute in a week when three of his horses suffered injuries.

Stravagante, who pulled up lame on Fridayâ€™s King Edward VII Stakes, was humanely euthanized on Friday night after veterinary surgeons in Newmarket were unable to save him.

â€œThank God we got a winner,â€ Stoute reflected after Snow Skyâ€™s triumph.

â€œThe horse surprised me a bit. He showed a fine turn of foot off the home bend and that won him the race.â€

Eoghan Oâ€™Neill and Italian jockey Christian Demuro teamed up to nail their first Royal Ascot winner when Suits You fought hard to fend off Ballydoyle in the Chesham Stakes.

Of Irish descent, Oâ€™Neill moved his training operation from Britain to France five years ago to take advantage of better prize-money in that country. He was reduced to tears in the winnerâ€™s enclosure.

After four days when the sun shined on Ryan Moore, Saturdayâ€™s rains marked a turn in the tide for the man who ended the week riding a post-war record of nine winners.

Moore was beaten on a string of fancied mounts, two of them for Irish handler Aidan Oâ€™Brien, who nevertheless closed the week as the meetingâ€™s leading trainer with five winners.

The day belonged instead to Ward, who travelled back to the US having landed his sixth Royal Ascot winner in as many years since his inaugural visit in 2009.