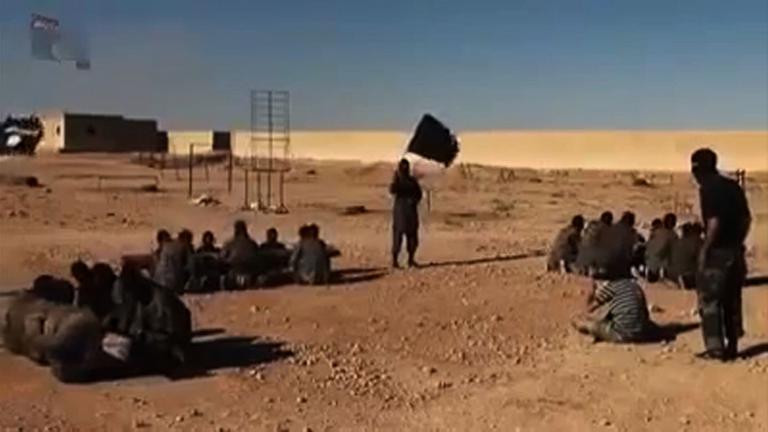 Tweets and YouTube videos by fighters from the Islamic State group have allowed analysts to pinpoint their movements in Iraq and Syria, highlighting the group’s increasing push towards government strongholds.

The data compiled by Britain-based analysts from IHS Conflict Monitor, and shared exclusively with AFP, shows how the Islamic State (IS) group is probing beyond the territory it currently holds and pushing the bulk of its forces towards Damascus and Baghdad.

IHS ranks the most reliable Twitter and YouTube accounts from known IS militants, as well as opposition activists and government sources, using the geo-location data from around 4,000 entries a month to map attacks ranging from assassinations to large-scale bomb attacks.

“The Islamic State is shifting its attention to the weakened Syrian government at the expense of losing territory to the Kurds in northern Syria,” said Firas Abi-Ali, head of Middle East analysis for IHS.

“We see the group’s operational reach goes far beyond the territory it controls,” he added. “This is a continually expanding project, there is no limit to where they would stop.”

The IHS data from March to May showed IS was making a tactical decision not to launch offensives against Kurdish forces on the northern front, which could leave its forces vulnerable to air strikes.

“Neither the Kurds nor the Islamic State appear interested in changing that front line,” said Richard Jackson, deputy head of political violence forecasting at IHS.

“That frees up IS fighters to push towards the capitals.”

The exception has been a key border crossing into Turkey, Tal Abyad, which the Kurds recaptured from IS this week.

Tal Abyad was the main entry point for IS to bring in foreign fighters, weapons and supplies — forcing the group to throw men and resources at trying to defend it.

But Jackson said that would be an exception, with IS forces continuing to press towards Syrian and Iraqi government strongholds.

“They’re not strong enough to take Damascus because the strong Sunni threat in that region is (Al-Qaeda affiliate) Jabhat Al-Nusra and Jaish Al-Islam, but they will push towards the Damascus-Homs road,” cutting off the Syrian regime of Bashar al-Assad from his Alawite community’s coastal stronghold of Latakia.

“Damascus is important, but Latakia is their home,” said Jackson. “That frightens Assad supporters.”

Abi-Ali said the team began the mapping project and ranking the reliability of sources in January 2014 to try to sift through the lies from all sides in the war.

“What we’ve seen in the Syrian conflict is groups over-reporting their activity to gain credibility. There were a lot of unsubstantiated claims that one side or another was winning,” he said.

Given the speed of their movement, IS fighters have made little effort to disguise their locations on social media.

“They rely heavily on their mobility, they move between battle fronts quite quickly and effectively, so they are less worried about giving away their location,” said Abi-Ali.

In Iraq, weak security forces and an ineffectual government mean IS is still able to make offensive gains despite a massive international effort involving thousands of air strikes, deliveries of weapons and other equipment and training for Iraqi forces.

The IHS data shows IS pushing into the capital, with 70 improvised explosive device (IED) attacks in Baghdad between February and April, as well as three suicide bombings.

“This is about undermining the enemy’s will to fight,” said Abi-Ali. “In their grander aspirations, it’s about inflicting enough casualties that you bring down the government or spark an exodus of the enemy population.”

Some IS operatives were members of the feared intelligence services under the regime of former Iraqi leader Saddam Hussein, and the group has been able to infiltrate towns, villages and tribes to lay the ground for takeovers.

“They have really well-structured sleeper cells,” said Jackson. “The beards come off. They speak against the Islamic State to see who disagrees. It’s divide and conquer.”

In the long-term, IS brutality and its totalitarian approach could provide an opening for other militant groups, including Al-Qaeda, which has been displaced by IS as the most active and feared jihadist organisation.

“Al-Qaeda tends to work with a group to take over an area and then back off, letting the local group run it,” said Jackson, citing examples in Yemen and Syria.

“That sort of cooperative approach is more likely to pay dividends than the IS approach of mass executions and killing all the dissenters. But that’s long-term, and we’re talking years.”