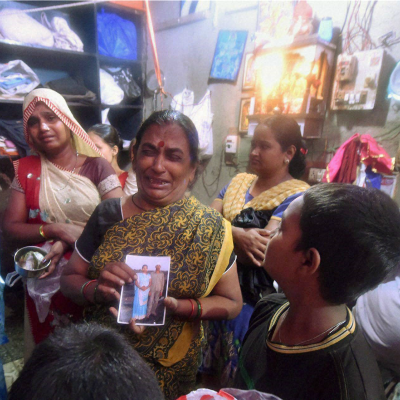 The toll due to consumption of spurious liquor in Malad area ofÂ MumbaiÂ today climbed to 100 with the death of four more persons.Â

“The death toll has risen to 100 while 39 are still undergoing treatment in various hospitals of the city,” Mumbai’s Deputy Commissioner of Police Dhananjay Kulkarni said.Â

The incident had occurred at Laxmi Nagar slum near Gamdevi Jurassic Park in Malwani in suburban Malad on Wednesday night.Â

This is the worst hooch tragedy in the city since December 2005 when 87 people lost their lives due to consumption of spurious liquor in suburban Vikhroli.Â

Police have already arrested five accused in the case but the prime accused – Mainka Bai – is still on the run.Â

Eight personnel attached to Malwani police station had been suspended after the incident.Â

The Excise department had earlier suspended four of its officials in connection with the incident for incompetence and dereliction of duty, state Excise Department Commissioner Shyamsundar Shinde said yesterday.Â

Mumbai Police have launched a search for others who might have consumed spurious liquor that day.Â

“We are checking every home in the vicinity and asking them whether they consumed liquor on that day. We found eight such persons and have admitted them to a nearby hospital,” a police official said earlier.Â

The Excise department in the last one year had registered 117 cases of distribution of hooch in Malwani.Â

“We had information of illicit liquor being sold in the area. So we raided the shop and seized the liquor,” Deputy Commissioner of Police (Zone 4) Ashok Dudhe said.Â

“City Police Commissioner Rakesh Maria has instructed all DCPs to crack down on illicit liquor shops,” he said.Â