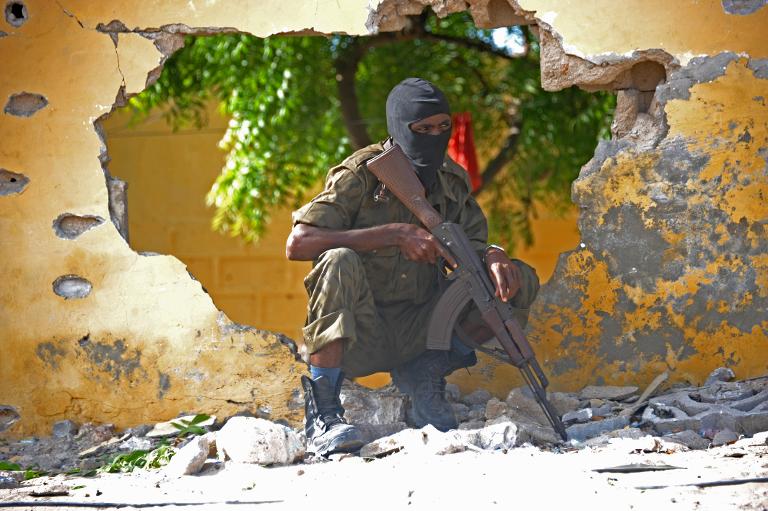 Shebab militants launched a major suicide attack on Sunday against a military intelligence base in Somalia’s capital Mogadishu, setting off a car bomb before storming inside, security officials said.

The interior ministry said the three attackers, one of them a suicide bomber, were all killed in the raid, and that the Somali security forces who fought them suffered no casualties.

A spokesman for the Al-Qaeda-affiliated militants confirmed they carried out the attack, Somali media reports said.

“The attack was successfully thwarted by our forces. None of our buildings nor bases were entered,” the internationally-backed government’s National Intelligence and Security Agency (NISA) said in a statement.

Somali officials displayed three corpses after the attack, which came at the start of Islam’s holy fasting month of Ramadan — a period when the Shebab, who are fighting to topple the Mogadishu government, have in the past intensified attacks.

“One of them detonated himself and two others were shot dead. They were trying to storm the premises but they have been taken out before they reached their objective. There was no casualty on our side,” he added.

The Shebab also conducted fresh attacks in neighbouring Kenya, with the militants gunning down a government administrator in the restive northeastern county of Wajir late on Saturday, and ambushing a military convoy near Lamu on Sunday, according to police.

Mohamed Barre Abdullahi, a local chief in Wajir, which is close to the Somali border, was shot dead after evening prayers at a mosque on Saturday.

Police said Abdullahi, a village-level government representative, was gunned down after finishing evening prayers, and that the attackers managed to escape under cover of darkness.

Kenyan security sources said the attack was likely carried out by the Shebab, who have stepped up operations in Kenya’s northeastern border region, including drawing up an alleged “hit list” of local government officials who have spoken out against the group.

In the coastal county of Lamu, the scene of a string of massacres carried out by the Shebab a year ago, a Kenyan army convoy was also hit by a roadside bomb, police sources said. Three soldiers were reported to have been wounded in the attack.

The Shebab, meaning “youth” in Arabic, emerged out of a bitter insurgency against Ethiopia, whose troops entered Somalia in a 2006 US-backed invasion to topple the Islamic Courts Union that was then controlling the capital Mogadishu.

Shebab rebels continue to stage frequent attacks, seeking to counter claims that they are close to defeat after losing territory in the face of an African Union and Somali government offensive, regular US drone strikes against their leaders and defections.

The militants have also carried out a string of revenge attacks in neighbouring countries — including the September 2013 attack on the Westgate shopping mall in the Kenyan capital Nairobi, which left at least 67 people dead, and the April massacre of close to 150 students in Garissa in Kenya’s northeast.

Somalia has been wracked by instability since the collapse of Siad Barre’s hardline regime in 1991.

The current government is being supported by a 22,000-strong AU force that includes troops from Burundi, Djibouti, Ethiopia, Kenya and Uganda.